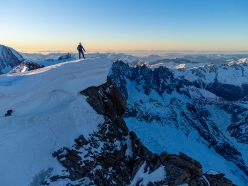 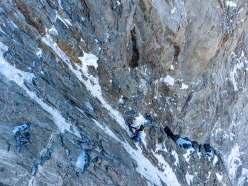 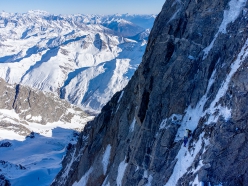 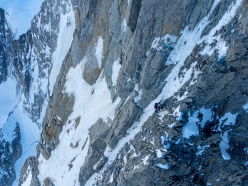 Interview with French mountaineer Charles Dubouloz who from 13 to 18 January 2022 made the first winter solo of Rolling Stones on the north face of the Grandes Jorasses in the Mont Blanc massif.

From 13 to 18 January 2022 the French mountain guide Charles Dubouloz climbed the north face of the Grandes Jorasses on his own and in winter via Rolling Stones, one of the most famous mixed climbs in the entire Mont Blanc massif. Established in July 1979 by the Czechs Thomas Prochaska, Jroslav Rutil, Ludek Schlechta and Jiri Svejda all the way to the top of the Walker Spur and to the left of the legendary Cassin route, Rolling Stones was first climbed in winter from 13 to 17 February 1984 by the Frenchmen Benoît Grison and Eric Grammond, while the first free ascent was carried out in March 2014 by the Slovenians Luka Krajnc and Luka Lindič. In order to crown his "long-cherished dream" Dubouloz needed five bivouacs and endured temperatures down to -30°C

Charles, first question which comes spontaneously from looking at the photos you posted: how are your feet and fingers?
My fingers are OK. During my ascent I had two days of strong north winds, about 50km/h, so it was really hard on my hands and feet. For my hands the problem is only superficial, while my right toe has suffered some frostbite. I will need some time to recover, but it won’t need amputating :-)

That’s excellent news! So let’s go back to the start: Where did this dream come from do you think?
Many years ago, maybe back in 2019 when I tried to climb Rolling Stones in winter with a friend. We reached the base of the route but then didn’t do anything because of the strong winds. It was then that I began to think that maybe one day I’d be able to climb this route solo and in winter…

So what does this route represent to you?
Personally I reckon it’s one of the most difficult routes in the Mont Blanc range. Very long, in the shade, with poor quality rock… a perfect recipe for a great adventure.

Have you soloed much in the past? Big routes like this one?
I come from a generation of climbers who like to climb fast and light. I love this, trying to be as efficient as possible with a friend up in the mountains. But I also love climbing on my own, soloing is an integral part of alpinism. Even though they might not very fashionable, solitary ascents are an important part of alpinism for me. In order to be versatile, you have to try all types of climbing. And when you are alone, everything is much harder, you have to think for two people, you have to climb fluently, and you need to be extremely focused on your ropework, and also your route finding!

Why in winter
Because conditions are harder, it’s cold, and there’s not much light. Last year I did the Drus North face via the Pierre Allain route. On my own and in 3 days. It was much easier, but it served as a good introduction.

You have climbed here in the past. What makes the Grandes Jorasses special to you?
The Grandes Jorasses are a beautiful "playground". Rich in mountaineering history, also in tragedies, it’s a legendary mountain. The north face is extremely long, in the shade, austere. Such a good place for an alpinist! And, last but not least, it’s also the biggest north face close to my house!

Why did you choose Rolling Stones in particular?
Because I didn’t have much information about the route. I’d always heard about the bad quality rock, it’s length. I wanted to experience a particular and hard adventure and have to admit that it was a great challenge.

What did you expect?
Something that would challenge me. A great adventure. Having to push myself.

And what didn’t you expect?
Those two cold windy days!

So how did the actual climbing go?
The conditions were very dry, especially at the bottom of the route. The pictures I saw of the climbers who had done the route before me certainly don’t reflect what I encountered. On the first 4 pitches I had to climb very dry and bad quality rock.... these didn’t help me feel confident for the upcoming days! In the end I wasn’t even that slow, 6 days in total.. When Patrice Glairon-Rappaz and Cédric Périllat made their repeat in the same period, they needed 5 days. So I think 6 days for me solo is a pretty honest ascent.

What was the hardest bit?
Maybe that first day. It was hard to get into the climb and deal with the bad conditions. It was a bit scary.

At a certain point you dropped your phone. What did you think about that?
It was bad, because it would have been my only way to call help if I needed to. And it was bad also because I had the topo on the phone… And also because I used the phone to listen to music :-( . It was really hard to lose all these bearings.

There were other climbers on the face if we’re not mistaken. How "alone" were you, physically and mentally?
Totally alone. The other climbers finished their route 3 days before me, so for the last 3 days I was on my own. I saw them, Hélias Millerioux and Julien Curvellier de Luze on the Gousseault - Demaison, just once, at the bottom of the route. After that I didn’t see anyone for 5 days. But it was OK. I was ready for that!

What did this solo experience teach you?
Ever since descending I haven’t had the chance to think about the route and my experience because of this big media interest. I am honoured that many people are interested in my ascent, so I try to answer everyone’s questions, andI also have to look after my family. So I still some need time to answer that question, sorry!

No worries Charles! So how about turning the question around: can you compare this route with other big climbs you have done in the past?
Firstly, for me this was a great moment! Hard but great. Secondly, last year I said to myself that any other climbs that come after Chamlang in the Himalaya with Benjamin Védrines will be "bonus", because I believe I have already experienced many nice adventures up in the mountains. of course, this is my personal point of view and maybe others might believe I’ve done nothing very much. But for me personally, Rolling Stones in winter, and solo, is a really good bonus!