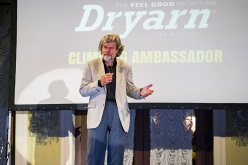 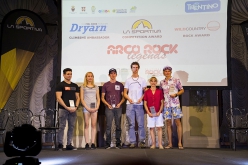 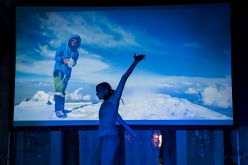 Arco Rock Legends 2018: Elena Friso dancing with a photo of Reinhold Messner in the background
Photo by Klaus Dell'Orto 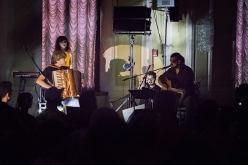 The XIII edition of Arco Rock Legends was held last night at the Casino di Arco. A host of phenomenal climbers and alpinists took part in the event, starting from Reinhold Messner who received the coveted "Climbing Ambassador" by Dryarn di Aquafil award. This unique climber, mountaineer and explorer was the first to breach grade VIII in the mountains, before pioneering modern alpinism. He became the first to climb all 14 peaks above 8000 meters and the first to climb Everest without supplementary oxygen. Messner credited the Rock Master Festival for its leading role in helping sport climbing develop into a discipline recognised worldwide. The visionary mountaineer received the important award "For having fuelled our dreams and having indicated the direction to explore, comprehend and surpass our limits, in climbing and in life".

Two rock stars were celebrated alongside Messner: Adam Ondra, winner of the Wild Country Rock Award and a complete athlete who combined both today and tomorrow, as underlined by the jury motivation: "The future that is present, inspiring visions that were considered unthinkable, for the entire climbing community."; and Romain Desgranges, who received the La Sportiva Competition Award, "For having taught us that the art of competitions and climbing never ends. And that dedication always leads to great results." The Frenchman in fact won the Lead World Cup last season aged 35.

The others nominated for the Wild Country Rock Award were Austria’s Angela Eiter, the first woman to climb 9b, and Alexander Megos who made headline news with the first ascent of the world’s fourth 9b+ after a mere 15 days of effort. The spectators also witnessed a exciting moment of fair play, when Ondra chose to dedicate his win to Eiter stating "Ten years ago we could even think that a man would be arrived at a 9c, but that a woman would have closed a 9b ?!".

Slovenia’s Janja Garnbret had been nominated for the In the La Sportiva Competition Award for her outstanding Lead and Bouldering results, along with Iran’s Reza Alipour Shenazandifard who in 2017 celebrated a phenomenal Speed ​​season while setting a new world record at 5.48 seconds.

As per tradition the awards were celebrated tonight with a selection of some of the most important international climbing magazines. The Jury was presided by RAI director Giorgio Balducci, while journalist and DJ Kay Rush once again hosted the evening immaculately. The Councilor for Sports of the City of Arco, Marialuisa Tavernini, also took to the stage.

The competitions today continue with the Lead World Cup Semifinals at 12:00, the Speed finals at 18:00 and the Lead finals at 19:45. Tomorrow the KO Boulder and Rock Maste Duel. All info on rockmasterfestival.com