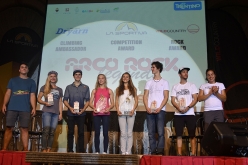 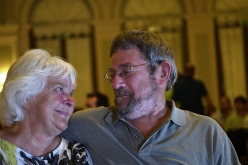 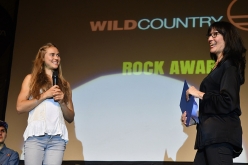 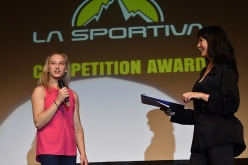 One is often quick to say that someone is a legend. In doing so however, one often risks exaggerating. Not in the case though of Mike Kosterlitz, 2016 Nobel Prize in Physics laureate and true climbing legend. Ever since the early 1970s, for generations of Italian climbers his name has evoked a legend. That of one of the most famous cracks in the Alps, and also climbs like Pesce di Aprile up Torre di Aimonin and Via del sole nascente up Caporal in Valle dell’Orco. And also the famous English route up Pizzo Badile. All that sufficed was the (somewhat “exotic”) name of the Scottish climber, who had travelled to Italy as a researcher at the Polytechnic University of Turin, for imagination to take flight.

Confirmation of this was seen on Friday night: when Mike Kosterlitz stepped up on stage at the Arco Rock Legends 2017, the standing ovation was spontaneous. Everyone in entire hall were on their feet. Beginning with Adam Ondra, Margo Hayes, Stefano Ghisolfi (nominated for the Wild Country Rock Award), Janja Garnbret, Shauna Coxsey and Domen Škofic (nominated for the La Sportiva Competition Award). The applause seemed to never end. Because Mike Kosterlitz, who received the Climbing Ambassador by Aquafil award, has “taught and demonstrated once again that great loves - like the one he has for climbing - are fundamental for our lives and for our development.” On Friday night during the sport climbing Oscars he demonstrated how simplicity goes hand in hand with greatness. What did he do in Arco during his stay? He watched the Rock Master competitions, he was astonished by their climbing and noted that "if I was younger I would like to try it." Like a climbing legend. And Nobel winner!

Great talent was also on display for the other two Prizes. Adam Ondra needs no introduction, of course. He is an alien on earth. Standing next to him was Stefano Ghisolfi, the extremely talented climber who is also capable of producing and transmitting truly important climbing culture. Then there was Margo Hayes. Sweet Margo. Who happens to be the first woman to have climbed 9a+. Her name has gone down in the history of sports climbing. And as of Friday her name is in the Wild Country Hall of Face, for "the strength, constancy, commitment and also the happiness expressed through climbing, for an achievement that will remain in the history of this sport." All this with a little emotion and a great smile.

A smile that also illuminated Janja Garnbret, winner of the La Sportiva Competition Award as last season’s most impressive competition athletes. The Jury motivation for Garnbret reads the following: "The example of young climbing the heads towards the Olympics and envisions the future. Always faster. Increasingly higher. Ever stronger.” A future that looks towards the Olympics, which the 18-year-old Slovenian champion shares with the other two super athletes nominated for the award: Britain’s powerful Shauna Coxsey and the incredible (and gentle) Domen Škofic. The future belongs to them. Tomorrow (climbing and not only) rests on the shoulders of these legends.

What remains to be mentioned is the beautiful, exciting evening. Kay Rush, as magnificent as ever, hosted the show while the great Bottega Baltazar musicians - Giorgio Gobbo, Sergio Marchesini and Graziano Colella performing for the first time ever with outstanding Debora Petrina - interpreted the Arco Rock Legends videos produced by Francesco Mansutti. A real show…

The Arco Rock Legends are organized by the Arco Sports Climbing club together with PlanetMountain.com and directed by Vinicio Stefanello.

23.08.2017
Mike Kosterlitz in Arco for the Climbing Ambassador
On Friday 25 August at Arco, Italy, Mike Kosterlitz will be the special guest of the 12th Arco Rock Legends, the sport climbing Oscars. The climber and Nobel Prize in Physics laureate will receive the Climbing Ambassador by Dryarn® di Aquafil. The candidates for the Wild Country Rock Award are Stefano Ghisolfi (Ita), Margo Hayes (USA) and Adam Ondra (Cze), while Shauna Coxsey (GB), Janja Garnbret (Slo) and Domen Škofič (Slo) are the nominees of the La Sportiva Competition Award.

26.07.2017
The children of Fessura Kosterlitz: the legendary crack climb in Valle dell'Orco
A legend, a desire destined to remain a dream for most climbers: this is what the Kosterlitz crack in Valle dell'Orco represented to the Italian climbing scene in the ’70’s and ’80’s after having been first ascended in the early 1970’s by Scotland’s Mike Kosterlitz. The 2016 Nobel Prize in Physics laureate will be at Arco on 25 August 2017 in order to receive the award Climbing Ambassador by Dryarn® di Aquafil during the Arco Rock Legends 2017. By Maurizio Oviglia.