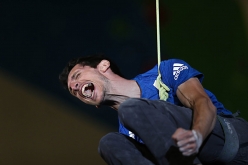 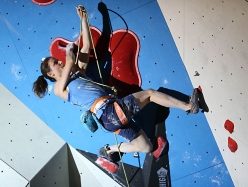 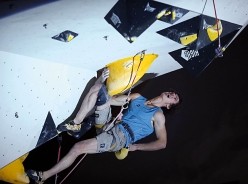 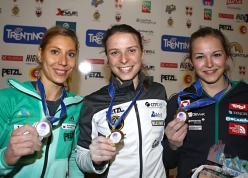 European Lead Championships, final act. The final hurdle was destined to be difficult and also exciting. Also because the Campitello climbing wall was in for the ride: everyone knew by now that in order to breach its enormous overhang the climbers needed power, plenty of power, but they also needed to climb absolutely perfectly because mistakes were simply not permitted. The area in front of the wall filled to the brim with spectators; the excitement was palpable, a great show was about to begin and everyone knew it. And like in all finals, the starting order was the opposite of the semifinal ranking. First out therefore was the climber who placed 8th in the Semis a few hours earlier.

Laura Rogora sets the ball rolling, on the red route up the lefthand side of the wall. Rogora’s tiny, a feather that climbs higher and higher. At half-height she tries to battle through the huge red volumes, but then falls. The route seems like a sufferfest… In the meantime the male competition begins with Hannes Puman who shoots up the yellow route on the right displaying great determination, taking the route in his stride. The Swede makes huge headway, dominates past the enormous yellow volumes. And continues ever upwards… then he cuts loose, climbs footless, but falls. What a performance: he's climbed more than three quarters of the route! One can almost hear the spectators asking themselves “perhaps the men’s final is far too easy?”

Next out is France’s Nolwenn Arc who… fails in the roughly same area as Rogora did, but 4 holds lower that the Italian. Austria’s Katharina Posch suffers a similar fate, in the “filter” section through those enormous red volumes, below Rogora but ahead of Nolwenn. France’s Salomé Romain breaks the spell and, battling superbly, climbs past Rogora’s highpoint only to fall three holds higher. Yes, the women’s final is no giveaway. And even Austria’s Jessica Pilz - who manages to explore a few holds more than the others - falls relatively low down on the route.

In the meantime the men’s route is attempted by Domen Skofic,one of the absolute favourites for the coveted title despite not having excelled in the Semis. The Slovenian shoots up like a rocket, but then explodes one hold below the Swede. Confirming that yes, Puman had climbed supremely. Next out is home climber Marcello Bombardi; the crowd is behind him but the route is by no means easy and he falls far below those who preceded him. Now it’s time for Jakob Schubert, the Austrian who’s got us accustomed to witnessing memorable battles, and here he’s no different. On the final overhang he climbs miraculously, higher than everyone else before him: he’s first, one hold higher than Puman!

It’s the moment of truth. The time has come for the last three male and female athletes. They’re the best three from the Semis, the climbers everyone has been waiting for. France’s Thomas Joannes (one of the revelations of this championship) climbs first, but falls below the top 4. Mina Markovic displays all her class, experience and determination and matches Pilz’s highpoint; she takes the lead thanks to countback to the Semis.

Next out is Adam Ondra. Everyone knows he’s capable of miracles; he’s produced many already in his illustrious career. And so as he climbs for himself he becomes a pleasure to watch. He’s as fast as ever, but the exit through the roof is a section that worries even a man of his calibre. Actually, no: “wonder Ondra” gets up to another one of his tricks and finds a crazy knee-bar. After a short rest he continues his foray but suddenly falls off the same hold as Schubert, meaning that the Czech takes the lead thanks to countback. At this point only one athlete remains, Romain Desgranges… In the meantime Janja Garnbret - the one everyone has been waiting for - suffers like never before and finishes her climb one hold below Pilz. So in the women’s competition only Anak Verhoeven still has to climb, while Mina Markovic waits anxiously in provisional first.

The rest is history, as they say. France’s Romain Desgrange climbs like never before and even manages to eye the end of the immense overhang. He falls from up there, two holds above the previous highpoint, and is crowned European Lead Champion. Adam Ondra is second, Jakob Schubert third.

The curtain now falls on the European Championships with all eyes on Anak Verhoeven. And the Belgian dances the most magnificent of dances. She climbs upwards, ever upwards into the sky… well almost the sky, because she finishes her waltz one hold below the top. But her performance is absolutely immense. She’s the new European Champion Lead, ahead of grande Mina Markovic who wins silver and Jessica Pilz who takes home bronze. It’s been a great competition, a truly superb show!

01.07.2017
European Lead Championship, Bombardi and Rogora qualify for tonight's finals
In the Semifinals of the European Climbing Championships Lead at Campitello di Fassa Anak Verhoeven from Belgium produced to the top to lead the provisional ranking, along with France’s Romain Desgranges. Italian hopes are high for Marcello Bombardi and Laura Rogora who qualified for the finals that begin this evening at 21:00.