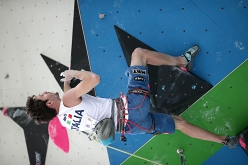 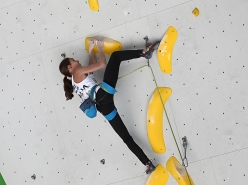 Male Lead Qualification. The qualification round of the European Lead Championship currently taking place at Campitello di Fassa in Italy held no surprises in store. Those who had to be there and do good, did so. Including home-favourite Stefano Ghisolfi who, with one top on route #1 and a near miss on route #2 finished in provisional 3rd place, thereby confirming that he is not only on great form but also that he is one of the favorites for the podium. Two other athletes fared better, and they certainly won’t want to miss out on the opportunity of clinching gold. Romain Desgranges from France was the only athlete to top out on both routes and his perfect climbs are an important display of power. As was that of World Cup winner Domen Skofic from Slovenia, who top out on route #1 and fell two holds higher that Ghisolfi on route #2. Perhaps the "greatest surprise" came from reigning world champion Adam Ondra who placed provisional 4th, joint-equal with another master of climbing competitions, Jakob Schubert from Austria. This duo had to “make do” as it were with just one top, on route #2 (only they and Desgranges achieved this fear). But the Semifinals are a completely different ballgame, and tomorrow will prove enlightening. As enlightening as the joy on the face of the other Italians who qualified within the best 26 for tomorrow’s Semis: Michael Piccolruaz (9th), Marcello Bombardi (13th), Filip Schenk (22nd), Francesco Vettorata (26th).

Female Lead Qualification. The women’s qualifiers kicked off to a great start with twin tops by 18-year-old Slovenian Janja Garnbret ... no more needs adding. Everyone knew that she’s the woman to beat. But that she’d be the only one of 59 athletes to top out on both routes was a tad more difficult to foresee. What is clear is that Anak Verhoeven will give it her best; the Belgian was second-best today, although it has to be said the two tops seemed a long way off. She was followed by 21-year-old Austrian Jessica Pilz, France’s young Julia Chanourdie and then 29-year-old Slovenian champion Mina Markovic who, with her provisional 5th place, is evidently still a force to be reckoned with… Two Italian forces who made it into the Semis are Laura Rogora and Claudia Ghisolfi.

The Semifinals Lead Male & Female begin tomorrow at 11.15
The Speed Finals take place this evening at 21:00
(Click here for the live streaming)