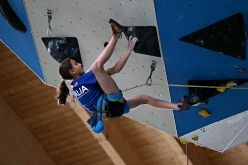 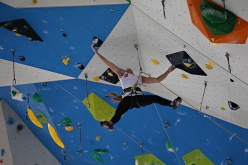 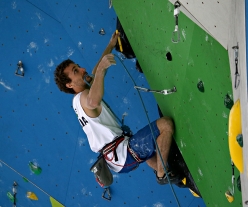 While the Val di Fassa Climbing club continues preparing for the IFSC European Climbing Championship (Lead and Speed) at the end of June, the Italian Climbing Team coached by Luca Giupponi has just spent four days training on the ADEL climbing wall.

The little town of Campitello di Fassa in the Italian Dolomites will be hosting the IFSC European Climbing Championship in less than a months time. And in the past few days the Italian National Team tested the ADEL wall where Europe's best climbers will be competing from 29 June to 1 July.

'We've tested the wall with the Lead male and female teams – stated coach Giupponi – and we will come back here next week for three more training days. The whole venue is fantastic, one of the best we have in the country,  the wall is as overhanging as it has to be, demanding and super tough. In addition, the area in the mountains looks simply stunning and the organisers are very well prepared.'

Stefano Ghisolfi is certainly one of Italy's most powerful athletes, the country’s best Lead World Cup climber. 'I feel good, I’ve got some pretty good results recently and that's why I am quite confident doing fairly well. I'll try to get a medal, that's guaranteed, even though being at home, in front of my crowd, it might become more stressful, but also exciting at the same time I guess.'

Stefano's sister, Claudia is also part of the team. 'At the very beginning I was quite worried, in Turin where I live the weather was already very hot and all the training was very hard. Here is Val di Fassa it is totally different and despite the fact I'm not in a great physical shape at the moment, I'm very focused and I really enjoy this time here with the rest of the squad. I'll be at my best when it really matters, when the European Champs kick off. My brother is very motivating, unfortunately we don't live together anymore, he recently moved to Arco and now I miss him a lot as he’s one of the only ones who manage to motivate me even on an off-day‘.

Laura Rogora is 16 years old and she certainly is a rising star. 'My dad was a climber and when I was 4 or 5 he took me and my sister to the crags, to climb together with him. The European Climbing Championship is my first senior tournament and I have no idea what to expect, I just want to do my best and I'm preparing myself physically and mentally for it.'

'My dream is to enter the first 15 in the competition standings – said Alberto Gotta – we now know the wall, we competed here during the National Cup. I think the Austrians, Slovenians and the French team are the toughest competitors, plus Italy of course!'

'We built up the committee in order to offer an cutting-edge event – stated Lorenza Dellantonio, member of the Val di Fassa Climbing OC – we still have some work to do, but we'll be ready for the Championship, that's for sure.'