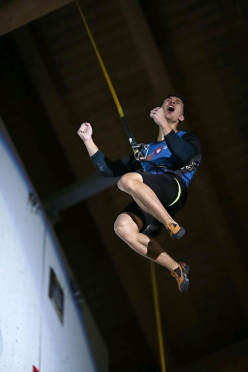 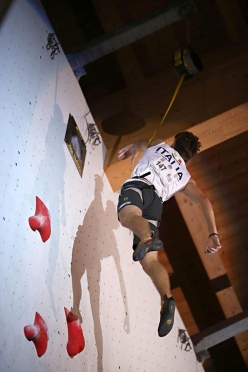 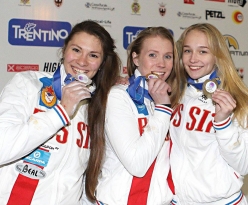 A huge downpour but also a great Speed ​​competition at the European Climbing Championships 2017 at Campitello di Fassa. The men’s round of 16 witnessed some of of the fastest climbers in the world, such as reigning world champion Marcin Dzienski from Poland, and Danyil Boldyrev from the Ukraine. They were joined by the strong Italian squad consisting of Alessandro Santoni, Cristian Dorigatti, Gian Luca Zodda, Leonardo Gontero and Ludovico Fossali. It was Fossali who produced a determined performance to qualify for the quarterfinals along with Cristian Dorigatti. The two Italians eliminated Russia’s Georgiy Morozov and the veteran of a thousand competitions Libor Hroza from the Czech Republic. Dzienski beat Zodda while Boldyrev got the better of Halasa to qualify for the next round, while Timofeev (Rus) eliminated Gontero, Kokorin (Rus) beat his teammate Luzhetskii, Deulin (Rus) clocked in before Santoni and Shikov (Rus) stopped the clock before Pavlenko (Ukr).

Immense Fossali won his place in the semifinals by beating Shikov with a great time of 5.99 seconds. Dzienski comfortably beat Timofeev who was eliminated due to a false start. Kokorin beat Dorigatti, 6.28 seconds vs. 6.80. Boldyrev bolted up against Deulin in a mere 5.95 seconds, forcing the Russian to fall. In Fossali's heat the Italian failed to match Dsienski’s 6.03 seconds, while Boldyrev produced an astounding run of 5.87 seconds against Kokorin. In the final between Dzienski and Boldyrev the Pole started strongly and raced to victory in 5.96 seconds, while the Ukrainian lost his rhythm and stopped the clock after 6.54. In the small final for third and fourth place Fossali raced valiantly but was forced to give in to Kokorin (6.26 vs. 6.32 seconds). So the European Speed Championship 2017 was won by Poland’s great Marcin Dzienski, silver went strong Danyil Boldyrev from the Ukraine and bronze to Russia’s Stanislav Kokorin.

In the women's competition the Russian squadron proved fearsome and a staggering 9 of its athletes made it to the round of 16. Five made it through to the quarterfinals: Iuliia Kaplina, Elena Remizova, Marija Krasavina, Anna Tsyganova and Elena Timofeeva. They were joined in the quarterfinals by Patrycja Chudziak and Edyta Ropek from Poland, as well as Alexandra Elmer from Austria. Unfortunately Elisabetta Dalla Brida, the only Italian to make it to the round of 16, was stopped by Russia’s Remizova (8.40 seconds vs 9.13 seconds). In the quarterfinals things ran like clockwork for the Russian team: Kaplina, Remizova, Krasavina and Tsyganova all made it through to the semis. In the battle for first place Kaplina beat Tsyganova with a time of 7.96 seconds vs 10.27 seconds, while Remizova beat Krasavina in the small finale. Meaning that Iuliia Kaplina was crowned European Champion Speed, Anna Tsyganova won the silver medal and bronze went to Elena Remizova.

Lead Semifinals male and female begin today at 11:00. The finals take place at 21:00.
>> Click here for the live streaming)