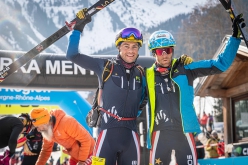 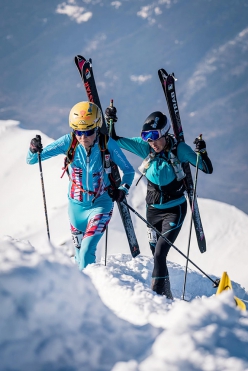 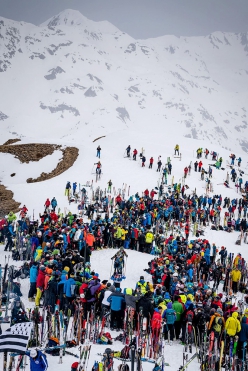 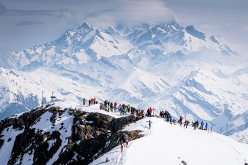 The 36th edition of the classic Pierra Menta ski mountaineering competition in Arêches-Beaufort in France took place from 9 to 12 March 2022 and was won by the Italians Matteo Eydallin and Michele Boscacci. The French-Swedish team comprised of Axelle Gachet Mollaret and Tove Alexandersson won the women's event.

While Axelle Gachet Mollaret and Tove Alexandersson dominated every single stage, laying the foundations for victory early on Wednesday morning with a lead of 18 minutes ahead of Martina Valmassoi - Katia Tomatis who eventually place second overall, in the men's competition overall victory was a highly fought-out affair. France's William Bon Mardion and Xavier Gachet staked their claim on day 1, clocking in after 2:15, two minutes ahead of Matteo Eydallin - Michele Boscacci and five minutes faster that Kilian Jornet Burgada who, after considerable time away from the world competition stage, had decided to make a comeback with his habitual partner Jakob Herrmann.

The second 27km stage was won on Thursday by Eydallin - Boscacci, two minutes ahead of Burgada - Herrmann and Bon Mardion - Gachet, allowing the Italians to take the provisional lead in the overall standings by just 21 seconds. Everything was still up for grabs and on Friday but Eydallin and Boscacci dug in deep, finishing close behind 3rd stage winners Matheo Jacquemoud and Samuel Equy and, importantly, increasing their lead in the general standings by 4 minutes ahead of Bon Mardion - Gachet.

Saturday morning's last stage took the athletes to the spectacular Col de Forclaz where an impressive number of spectators had ascended to cheer them on. Jacquemoud and Equy won their second stage, one minute ahead of Bon Mardion - Gachet, while Eydallin - Boscacci finished third and sealed overall victory with a total time of 9 hours and 48 minutes. William Bon Mardion and Xavier Gachet placed second in 9:51. Despite encountering physical problems Kilian Jornet Burgada, driven on by Jakob Herrmann, managed to defend third place in the overall standings.