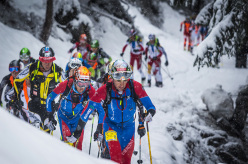 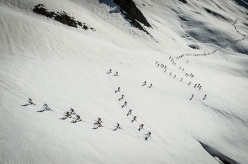 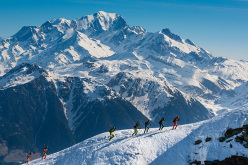 Four competition days and four difficult stages in the Arêches-Beaufort mountains in the French Alps to assign four winners: Matteo Eydallin and Damiano Lenzi in the men's event, Laetitia Roux and Maude Mathys in the women's. This is the result of the 29th edition of the Pierra Menta, the superb ski mountaineering marathon that began last Thursday and ended, after almost 10000 metres vertical height gain, in a great success. And the victory, after 9 hours and 36 minutes of intense battle, that went to the Italian squad who beat the Frenchmen William Bon Mardion and Mathéo Jacquemoud by a mere two minutes.

This result overturned that of 2013 and came about thanks above all to the incredible performance on day two, when the two top Courmayeur military athletes crossed the finishing line almost 3 minutes faster than their closest rivals. This massive gap practically annulled the French victories in the other three stages; the margin was always too small (just a few seconds) compared to Eydallin and Lenzi who carefully controlled their lead to clinch overall victory. Bronze went to the Frenchmen Xavier Gachet and Valentin Favre and to fully comprehend the performance of the first two pairs a glance at the stopwatch proves revealing: 9:53:47, i.e. almost 17 minutes slower than the winners.

No surprise results in the women's event: the French-Swiss team comprised of Laetitia Roux and Maude Mathys won all four stages and won the Pierra Menta almost an hour ahead of second placed Axelle Mollaret & Emilie Gex-Fabry, and 1 hour and 6 minutes faster than the Italian - Swiss team comprised of Martina Valmassoi & Séverine Pont Combe. While this is Mathys' first Pierra Menta victory, Roux now celebrates her 4th after those in 2013, 2011 and 2008. Truly "intouchable".

Now that the 2014 has come to an end, many of the 200 teams have little time to recover: from 28 - 30 March they'll be racing up and down the crests and gullies above Valgrisenche in Val d’Aosta, during the famous Tour du Rutor…