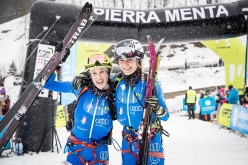 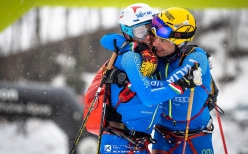 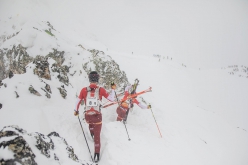 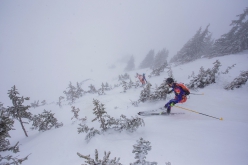 On Friday 12 March the ultra classic ski mountaineering competition Pierra Menta took place in the Arêches-Beaufort mountains in France. Instead of the usual 4-stage mountain marathon, just like last year the competition was staged in a single day due to the Covid pandemic and, importantly, was also valid as the first World Championships Long Distance Team event.

38 teams lined up at the start of the race course which provided 3400 meters altitude gain; after the start was initially postponed due to bad weather, right from the outset the Italians Michele Boscacci and young Davide Magnini dictated the pace, together with Switzerland’s Rémi Bonnet & Werner Marti and France’s William Bon Mardion & Xavier Gachet.

Halfway through the race, the Italians increased their pace during one of the ascents and managed to break away from the others to cross Col de la Forclaz about 2 minutes ahead of their rivals. After the descent through the fog the route continued via a technical ridge, but despite feeling exhausted Boscacci and Magnini managed to increase the advantage to about 4 minutes at the last gate. At the finish line they stopped the clock after 3:28'25'', 5 minutes ahead of Marti & Bonnet who beat Nadir Maguet & William Boffelli by just 14 seconds with a time of 3: 33’18’'. Austrians Jakob Hermann & Christian Hoffmann placed fourth, ahead of Italy’s Robert Antonioli & Matteo Eydallin, fifth.

As predicted, in the women's competition France’s Axelle Gachet-Mollaret & Lorna Bonnel initially battled it out with Italy’s Alba De Silvestro & Giulia Murada and at the first gate the two teams were practically level. This changed during the second ascent when the Italians managed to take the lead, taking teammates Ilaria Veronese and Mara Martini with them, and the two Italian teams crossed the finish line after 4: 15'08'' and 4:18'58'' respectively to take gold and silver respectively. More than six minutes late Axelle Gachet-Mollaret & Lorna Bonnel crossed the finish line to claim bronze, ahead of the Swedes Tove Alexandersson & Fanny Borgström and Giulia Compagnoni & Katia Tomatis, 4th and 5th respectively.

For Giulia Murada and Michele Boscacci the victory was particularly special as in 2002 their fathers Graziano Boscacci and Ivan Murada won the 17th edition of the most classic of all ski mountaineering competitions.