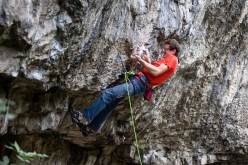 In keeping with Scotland’s tradition of producing utterly brilliant but equally underrated climbers, on 25 October William Bosi pulled off a remarkable repeat of Hubble, Ben Moon’s 1990 masterpiece at Raven Tor. Prior to this repeat, the 17-year-old had made a name for himself for repeating Rainshadow at Malham Cove and, in doing so, for becoming the youngest British climber to climb 9a.

Hubble’s revolutionary intensity introduced a new era of difficulty at the start of the 90’s - it was heralded as the world’s first 8c+ - and over time its aura has grown steadily, giving rise to speculation that it may actually be harder that Moon had originally suggested. Possibly even 9a. So far it has only been repeated by the Brits Malcolm Smith (1992), John Gaskins (1994), Steve Dunning, Richard Simpson (whose 2005 ascent has been questioned), Steve McClure (2009) and, earlier this summer, Germany's Alexander Megos.