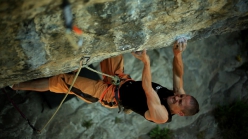 Two of Britain's most emblematic sport routes, Hubble 8c+ at Raven Tor and Liquid Ambar 8c at Lower Pen Trwyn, have recently been repeated by Steve McClure and Pete Robins respectively. The two climbs in question were established in 1990 by none other than Ben Moon and Jerry Moffatt and in many ways marked the highlight of their careers.

Both routes are considered hard for their grades, so much so that Hubble has only seen six ascents in its nigh 20 year history, while Liquid Ambar is rumoured by some to be 8c+ and had only been repeated by Ben Moon and Rich Simpson.

McClure is no newcomer to hard repeats and cutting-edge first ascents as the top sport routes in the country, such as Northern Exposure 9a+ and Overnite Sensation 9a+ have all been established by him. He gave us the following insight into the importance of his ascent of Hubble, which comes after Malcolm Smith, John Gaskins, Steve Dunning and Richard Simpson. As we wrote back in 2005, how long must we wait until the line receives its first international repeat?


Hubble - a personal persective
At risk of being rude: in the light of all the other hard routes you've massed up over the years, why did you wait until 2009 to repeat it?
Hubble isn't my style, it requires massive bouldering power and cannot be tricked in anyway! Also it has a very long reach at the start that is desperate for the short. I left it mainly since progress on a route like this is very slow if you are 'off the pace'. I always had a few days per year just to see, and always went away unable to do a few of the moves. I wanted it to 'feel' doable before I got involved. I really enjoyed the process of climbing it, it was very different to making progress on a long route where each day there are noticeable gains towards success. On Hubble the gains were the same in terms of percentage, but much smaller in their appearance: a slight shift of body position or thumb catch or toe drag making small but crucial differences. It was a much more subtle journey and maybe even more enjoyable!

How would you rank this climb compared to your other hard ascents in terms of difficulty?
For me personally its probably in the top 5, but hard to say as I'm stronger and better now than I was 10 years ago. Also for me its harder because its so bouldery. A 9a power endurance route will feel easier for me than  8c+ boulder route!

And in terms of satisfaction?
Very high, it's a personal milestone. Not the grade that counts but this route has real history. Perhaps its one of my biggest ticks ever. Maybe even in the top two along side Northern Lights - ironically both made famous by Ben Moon!

This may sound stupid - hard modern sport routes seem to become longer and longer. Can you envisage the opposite happening, or do we necessarily need 90m routes to climb 9b?
No, short routes can be 9b. Boulderers capable of this probably cannot be bothered with ropes though. Long routes are easier on the mind and body and easier to train for, so they're consequently more popular - I can vouch for that!

After Richard Simpson climbed Hubble he then Action Direct the same year, saying he felt he wanted to climb the classics. Do you feel the same? How important is it to repeat other testpieces for you?
Very - first ascents are very satisfying, but you don't know how hard they are, you don't know the level of the challenge relative to others. The most important thing really is to find the right challenge for yourself regardless of grade, but sometimes its good to put yourself up against a test piece. Hubble had a reputation!

Is there anything left for you to do at Raven Tor?
Two routes, an 8b/8b+ that I've never tried ad should go quick when I get round to it, 'Houligan' an 8c with a massive reach at the start that is font 8a+ even if you are tall. One day I'll do it when I grow! New routes are thin on the ground. There is the unclimbed 'Brandenburg Gate', an old project, tried by a few and thought to be solid 9b. It's very short, next door to Hubble and in the same style but less holds! Hm.....