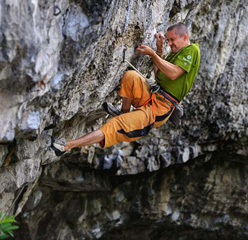 Hubble, the video of Steve McClure at Raven Tor

There are few routes which have such a massive reputation and aura as Hubble, Ben Moon's extreme test at Raven Tor in England. Few moves, all of a revolutionary intensity, linked on 14 June 1990 by a extraordinary Moon (in version rasta) who with this masterpiece produced the world's first 8c+. And what an 8c+! Even today the route stoically resists attempts (just ask Adam Ondra) and in its 22-year history, the route has been climbed a mere 6 times. All by Brits, of course: Malcolm Smith, John Gaskins, Steve Dunning, Richard Simpson and, in 2009, Steve McClure who explains here why this route is so special.