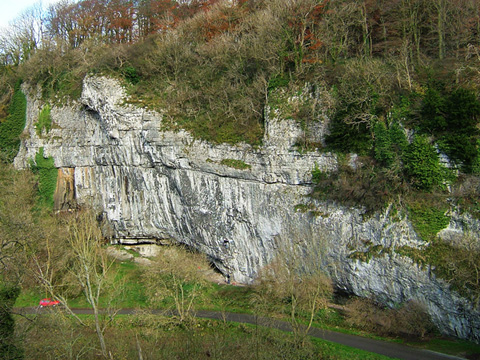 Raven Tor. A crag that has become famous beyond its own measure. Sometimes though history is worth as much as quality, and sometimes it even adds quality. This is a crag that was undoubtedly base camp for the sport stars in the eighties and early nineties, the UK’s forcing ground for the hardest routes. Ron Fawcett on Sardine in 1981, Jerry Moffatt with Revelations in 1984 (one of the world's hardest at the time), followed by Antoine Le Menestrel's famous solo of Revelations a year later, Martin Atkinson and his Mecca - The Mid-life Crisis in 1988 (at 8b+ yet another one of the world's hardest, completed the day before he emigrated), Ben Moon's Hubble (the world's first 8c+ in 1990) , and finally Moffat on Evolution in 1995 – which in many respects marked the end of the sport boom in the UK.

Some love it, some hate it, but none find Raven Tor easy. With 7b being about the easiest way up, this is certainly not a beginners crag! The saying goes that if you can climb hard here you can climb hard anywhere... Routes are extremely technical, extremely fingery and extremely intense. They are not ploddy stamina routes with good shake-outs.

Although visually some may feel Raven Tor to be mediocre when compared to many world class crags, the scale should be looked past and the quality of the routes absorbed. As an example, Hubble, at only around 8 hard moves long and one of the shortest on the cliff, is one of the best routes I have ever climbed! Most that become absorbed become obsessed: short, intense sequences occupying any free mind space and drawing back the addicted over and over, often for a lifetime. There is enough here even for that, and whole careers have been spent at the Tor, for some, even on one route! But the cliff has much more to offer: contrasting the shorter bouldery routes there are much longer affairs up to 30 metres in length. But even these are hardly plods, more like battles; with complex sections interspersed with arm sapping rests. Even the boulderer will be happy, with very short hard problems both steep and vertical, as well as endurance nightmares over 100 moves long.

The short-climber's card can’t be played here, the rock is too featured, with many edges and opportunities, though rarely very big! It leads to a unique style, a technician's delight. Power is not enough, but a large bag of it is essential! You’ll want good conditions for those tiny crimps, spring and particularly autumn are perfect when the mornings are cool and the air is clear. Should it rain the crag is so steep it won’t get wet and you won’t even need an umbrella to get to the crag from the car. It only takes 20 seconds!

Raven Tor is located in Miller’s Dale on the banks of the gentle River Wye. From Buxton take the A6 east, then turn onto the B6049 Buxton - Tideswell. After crossing the river turn off right for Litton Mill and the Angler’s Rest Inn. Limited parking two small lay-bys. The crag can also be reached by bus from Manchester and Sheffield to Tideswell and the Angler’s Rest. 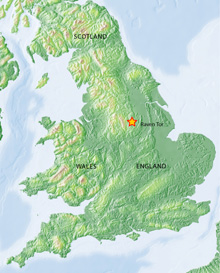