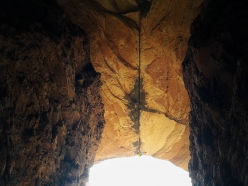 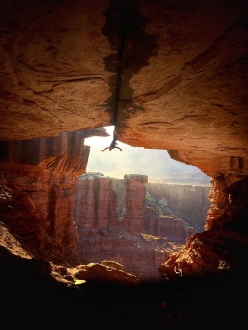 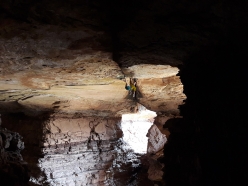 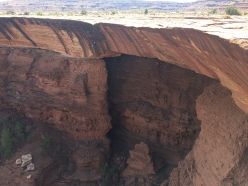 PORTFOLIO / gallery Portfolio: The Crucifix at Canyonlands, progress and photos of Tom Randall and Pete Whittaker

The Crucifix at Canyonlands, progress and photos of Tom Randall and Pete Whittaker

In September 2017 British rock climbers Tom Randall and Pete Whittaker returned to the Moab, USA where they made progress on their The Crucifix, hailed as one of the hardest trad climbing projects in the world.

“The holy grail of crack climbing.” This is how in spring 2016 Tom Randall and Pete Whittaker described a 55 meter crack they discovered in America’s Canyonlands. Boasting a 10 meter crux section comprised of multiple mono finger jams, the horizontal roof proved simply too difficult and so, after making the first ascent of the beautiful The Millennium Arch, they were forced to return home.

“The chance to put together over 7 years worth of crack climbing obsession into one single route is unique” they stated, and consequently they began training specifically for this project prior to their US trip this autumn. Battling against the heat, the rain and the utter difficulty of the line, once again they failed to free the climb, but they did make what they believe are small steps forward. All moves now been unlocked except for one, and after their efforts they stated “we really can't do this move yet. Not even close. It'll take work and a lot of belief. I'm not sure either of us will ever do a move harder (or more disgusting) than this one in our lives.”

On "waiting days" they were joined by Moab friends and a flurry of new 3-star roof cracks were first ascended onsight, namely Raining Scorpions 5.12+, Bigger Than Your Boyfriend" 5.12+, Suck it Up Buttercup 5.7 and Jessie's Big Guns 5.11. More efforts were required to redpoint Lamb of God 5.14 and All Pump no Funk 5.13, and both are hailed as superb additions to the climbing below the White Rim.