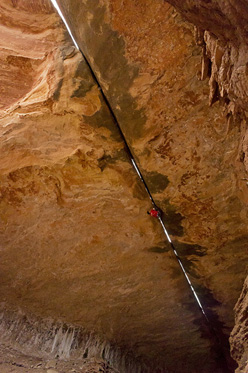 "Given the unique beauty and importance of this plum line though, it wouldn't surprise us if it were to receive a free ascent in the near future, this time without any pre-placed gear. Perhaps even by the boys themselves..." This is what we wrote at the start of October when Pete Whittaker and Tom Randall had managed to climb the beautiful off-width Century Crack in America's Canyonlands.

We had been prompted to write these words because although their 8c ascent had been monumental, it lacked a final detail: both had opted to climb the immense, 40m horizontal roof pinkpoint, i.e. with the trad gear already in-situ. This fact did not go by unnoticed and raised eyebrows, in particular because placing 12 Friends, and setting off with an additional 6 kilos strapped to the harness therefore, makes an important difference we believe.

Well, after having savoured more off-widths in Zion and Indian creek the two Brits returned to the White Rim and on Thursday both climbed Century Crack first go, this time placing the gear as they went. They opted to place a mere 8 Friends which resulted in less weight and longer run-outs, and according to photographer Alex Ekins Pete Whittaker was so stretched he forgot to place one of the camming devices! After his ascent Whittaker stripped the gear and then Randall fought his way through the battle of his life.

Congratulations are in order for their talent, form and above all desire to take things to their logical conclusion!