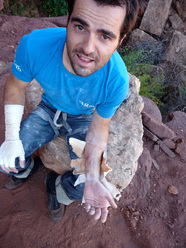 Jean-Pierre "Peewee" Ouellet has made the first ascent of Necronomicon 5.13d/5.14a beneath the White Rim Trail in Canyonlands, USA.

The last time we reported about the White Rim in the Canyonlands National Park was when British climbers Tom Randall and Pete Whittaker made the first ascent of Century Crack. Hot on their heels, Canadian born Jean-Pierre "Peewee" Ouellet has now freed a nearby 30m horizontal roof crack first discovered and attempted by Rob Pizem.

Quellet needed circa 12 attempts spread out over 2 weeks and he sent the 30m line placing all the gear as he went: 10 Black Diamond Camalots from number #1 to #4. Quellet believes the route weighs in at circa 5.13d/5.14a and is definitely harder than the following: