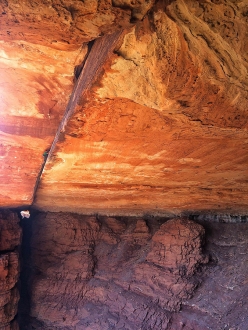 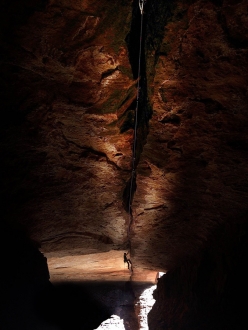 British climbers Tom Randall and Pete Whittaker have made the first ascent of The Millennium Arch, a circa 100m roof crack at Canyonlands, USA they have now graded 5.14.

Five years after the first ascent of Century Crack, famed as one of the hardest offwidth cracks in the world, Tom Randall and Pete Whittaker may possibly have taken things one stage further with the first ascent of The Millennium Arch, a huge roof crack once again below the White Rim in the Canyonlands, USA.

Randall and Whittaker located the route in May this year during their reconnaissance trip through Utah’s Canyonlands while searching for a route that would take their climbing to a completely different level. Armed with satellite photos, google maps and plenty of patience, the two spent a fortnight exploring both the East Side and West Side of the White Rim and although they discovered countless little gems, they failed to find what what they where looking for. On their very last day they abseiled into an apparently uninspiring cave but their jaws dropped as they realized they had just stumbled across "the holy grail of crack climbing", namely an absolutely perfect, 180 foot crack bisected by another crack which gave the appearance of a giant Crucifix.

The two flew home to the UK and started training furiously for what they dubbed The Crucifix Project, yet on their return this autumn they discovered that the difficulties are, for the time being, unsurmountable. Between one attempt and the next though they decided to try their luck on another line amazing they had spotted nearby, a huge arch that splits an adjacent cave. "We got distracted by one very, very big roof" explains Randall "This one is a once-in-a-lifetime climb as it's not every day you get to annihilate yourself on a 300ft roof crack."

Talking to planetmountain.com, Randall stated "The crack was intimidating at first, and trying to climb it proved a huge logistical problem. Up there, equipping it with trad gear, hanging upside down for so long… it was like trying to climb a big wall, only that this one long, variable-sized crack." The duo initially split the arch into three pitches, three logical sections along which they confess to have broken "all the rules in normal climbing." After having worked the moves and left the gear in-situ, they then proceeded on their their marathon free ascents - which lasted over two hours each - during which they even had to untie mid-ascent from one rope and continue with another as they ran out of rope…The Millennium Arch has been given an overall grade of 5.14, and Randall explains "We cannot say this is a trad route, nor is it a sport route. We simply call it a real climbing challenge." Climbing the feature without pre-placed gear is certainly possible Randall concedes, but would require splitting the route into 3 pitches.

When asked about how The Millennium Arch compares to Century Crack, Randall explained "It’s hard to be objective, five years down the line. At the time Century Crack seemed like such a big deal. It was like "There’s no way we’ll ever be able to do that." Now though we have far more experience and are far fitter. This could well be a step up".

Now that they have succeeded on their "process goal", Randall and Whittaker are once again focusing on the Crucifx project. Time is not on their side though and they may be forced to return home without a successful redpoint. This would mean more time training on their legendary off width crack in Randall’s cellar which is, quite amazingly, only a few meters long. "Yeah" Randall concludes "it’s amazing how specific, dedicated training can pay off and translate into such cool routes."