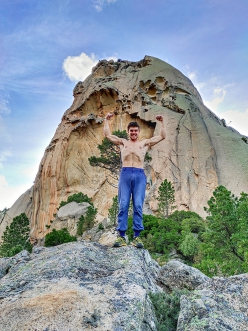 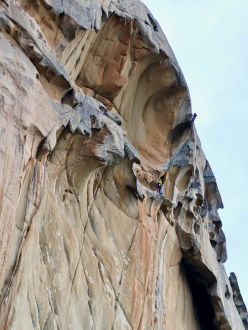 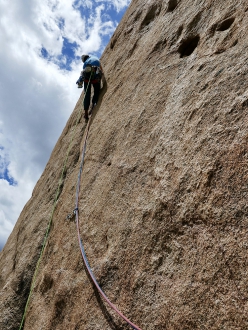 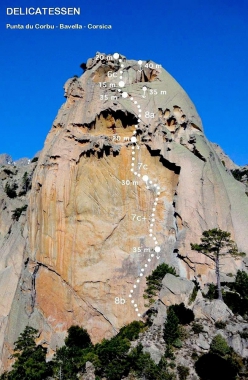 Symon Welfringer delights in Delicatessen, Ro.Ma and other Corsica classics

As the waves rock our return to the mainland France, it is with stars in our eyes and worn skin that we think about our climbing trip to Corsica. Three weeks of adventure in a unique playground, the granite of Corsica is certainly one of the most beautiful of the world! This was my first climbing trip there and I have to admit that I discovered a wild and magical place with an incredible potential!

I had never had the opportunity to travel to Corsica until now but Delicatessen had played in my mind for a long, long time. The rough, rounded features of the Bavella massif and the fame of crux slabs on Punta d’u Corbu had always fascinated me. Hyper-motivated but also slightly scared I embarked on the route, belayed by my girlfriend Manon Berend.

After putting in the quickdraws and checking a few moves in the 8b crux pitch, which happens to be the very first pitch of the route, I sent it first try. The conditions were ideal, the shade came and a strong wind hit cooled Punta U Corbu perfectly. I managed to climb exactly as I had imagined, relaxed and concentrated and reached this very particular state of almost non-existent gravity; I passed the crux and continued smoothly up the slabby moves without falling. Surprisingly, after only one try, I found myself at the belay of the 8b!

But here the route is far from over, the next pitches have a reputation which precedes them and climbing them all free is not easy! This first part of the day had given me the confidence I needed and I managed to climb my very best on the following two pitches, levitating up a highly demanding 7c+ and 7c. I was convinced I was going to fall, but somehow my body stayed glued to the wall, I don’t know how. Magic perhaps?

At every belay, my smile grew. Full of energy I started up the last hard pitch, a really bouldery 8a, only to discover a 2m section that seemed totally impossible. All hopes of sending the route in a day suddenly evaporated and I began to get frustrated. I felt around, touching non-existent holds and found no way up! What a crying shame!

Then, stretching my imagination, I finally figured out the beta for the crux and managed to work out the final slab. But by this point the skin on my index finger was completely trashed, more tries were out of the question and I knew I could only give it one proper attempt. So I focused all my energies and letting out a few power screams I crimped hard and stuck as close to the rock as possible to finally reach the chain at the belay! Two easier pitches led us to the top of Punta U Corbu, a masterful summit that seems to struggle to find its place among the multitude of needles that surrounded us. From up here, the Bavella massif seemed endless … Bravo to Stéphane Husson and Arnaud Petit for establishing this gem ground-up!

During my trip I also managed to make what I believe is the first repeat of another impressive route called Ro.Ma (7c+/200m). Established ground-up by Rolando Larcher and Maurizio Oviglia, this is another King line on the amazing Punta U Corbu wall. I managed to onsight all the pitches using the new belay like the first ascensionists. I also managed to repeat Parfum de Violence on Punta Lunarda (8a/270m) and make a pinkpoint ascent of the single-pitch La Baraka, a great 8a established by Gérôme Pouvreau opposite Punta U Corbu. This was my first trip to the beautiful Mediterranean island, but it certainly won’t be my last!

14.07.2001
Corsica rock climbing
Climbing on Corsica: a selection of some of the best multi-pitch rock climbs in Bavella, Val Restonica and Valle du Tavignano. By Maurizio Oviglia.

13.09.2018
Corsica: summer rock climbing on the island’s best crags
Sport climbing in Corsica: the best summer crags to climb in the shade and avoid the sweltering heat. By Thierry Souchard and Maurizio Oviglia

21.05.2012
Bavella 2012, two new rock climbs in Corsica by Giupponi, Larcher, Oviglia and Sartori
At the start of May 2012 in Corsica's Bavella massif the Italians Rolando Larcher and Maurizio Oviglia made the first ascent of Vecchia Felpa on Punta U Peru (190m, 7c max /RS2/I) while Luca Giupponi and Nicola Sartori made the firts ascent of Tafunata Galattica up the Contrafforti di Punta A Muvra (185m, 7b+ max 1 section FB7B/RS2/I). The route topo, report, team spirit and the fascinating Bavella by Maurizio Oviglia.

24.05.2011
Delicatessen, first repeat in Corsica's Bavella after 10 years by Nina Caprez, Cédric Lachat
Cédric Lachat and Nina Caprez have carried out the first and second repeat of Delicatessen at Punta d’u Corbu at Col de la Bavella, Corsica. The 120m high 8b was established by Arnaud Petit and Stéphane Husson in 1992 and freed by Arnaud in 2001.