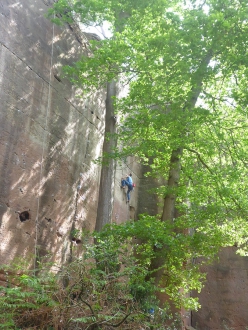 Britain’s Steve McClure has made the first ascent of GreatNess Wall, the long-standing trad climbing project at Nesscliffe, England. Graded E10 7a, this checks in as one of the most difficult trad climbs in Great Britain.

Steve McClure, the driving force behind the hardest sport climbs in Great Britain, has made the first ascent of the long-standing trad project at Nesscliffe, England. Originally thought up by bold trad expert Nick Dixon, the open project made our headline news only recently when James McHaffie got heartbreakingly close, only to fall off the last hard move and take an enormous whipper featured in the video below.

The line provides the equivalent of 8c climbing with a crimpy crux at a height of 18m and the last pieces of protection at 12m, making it in McClure's words "super technical, hard, spicy, but not death (important - for me)." After having briefly worked the project the 48-year-old successfully made the first ascent by the skin of his teeth on Monday. Graded a whopping E10 7a, GreatNess Wall as it has been called checks in as one of the most difficult trad climbs in Britain.

McClure told planetmountain.com the following "I had three visits to the cliff for this one, a quick look at the moves on a shunt, then back a bit later to suss it out properly. I then managed on a toprope in one and went for a lead, but conditions weren’t good and I took a pretty big fall. I'd not really planned on going for it as its pretty spicey up there and I figured I'd need to be fairly sure I'd not fall - but where do you go after a no falls-top-rope? Another one? I guess so if its really dangerous, to reduce the margin of error, but I'd convinced myself that a fall even from the last move would 'probably' be OK. In retrospect, it wasn’t a bad thing that I did fall on that go, before getting too far up as I don't think I'd have stuck the crux hold, not considering how close it was on the actual lead.

On my third trip conditions were much better and I managed it first go, but only just, VERY close. But that's the best way isn't it?! There is not much gear. The lower wall is maybe only 7a+ (route grade) and protected by good Dragon cams, I placed two on lead, but you could place more. Then there is a good thread that’s preplaced - you'd struggle to thread the rope through the tiny hole on lead. That’s the last kit, protecting the whole upper wall. Which is very cool! No fiddling around, you just go for it!"

Steve McClure is most certainly best known for his sport climbing since over the last two decades almost all the hardest sport climbs in the UK were put up him, including Rainman at Malham Cove, the first sports climb in Great Britain to be graded 9b which fell after a 128-day odyssey. His first ascent of GreatNess Wall comes as no great surprise though since his early roots are firmly engrained in trad climbing and over the years he has amassed numerous bold trad repeats and difficult first ascents, including Choronzon in Pembroke, Wales (2015) and Elder Statesman at Curbar Edge in England in 2013.

James McHaffie attempting the trad project at Nesscliffe, May 2019