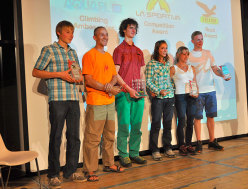 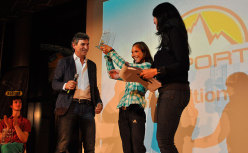 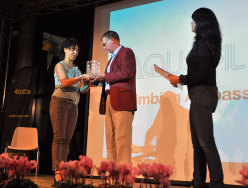 On Friday 7/09/2013 during the 8th edition of Arco Rock Legends the Salewa Rock Award was won by Adam Ondra while Mina Markovic won the La Sportiva Competition Award. Paraclimbing and all Paraclimbers received the prestigious prize Climbing Ambassador by Aquafil.

He is the climber that everyone wants to be. One of the strongest, for many perhaps even the strongest ever in the history of sport climbing. She is the competition athlete who has improved most in recent years. As strong in Lead as in Bouldering, she represents the evolution of the sport rock climbing. They, Adam Ondra and Mina Markovic, are the winners of the Salewa Rock Award and the La Sportiva Competition Award, the special climbing Oscars for sport climbing (crags and bouldering) and competition climbing that were held last night in the packed and special eighth Arco Rock Legends ceremony, presented perfectly as always by Kay Rush.

There awards were flanked by the Climbing Ambassador by Aquafil prize which went to the Paraclimbers and the entire Paraclimbing movement. In the past this prestigious award went to all-time climbing legends such as Manolo, Luisa Iovane, Lynn Hill, Yuji Hirayama, François Legrand and Stefan Glowacz and this year SSD Arco Climbing, the organisers of Rock Master Festival, decided to award this prize to these true climbing heroes. Right from the outset Arco has always believed not only in the absolute value of these athletes but also in the positive and profound message they send to the climbing world. It comes as no coincidence that the first ever Paraclimbing World Championship took place right here in Arco in 2011 and, that same year, the first crag for disabled climbers was created. Including them in the sport climbing Hall of Fame was important and just therefore and this unanimous decision received the longest, loudest and most heartfelt applause that evening. Deservedly so.

As deserved as the Salewa Rock Award – the 4th so far – given to Adam Ondra, the 20-year-old who continues to “blast” through all parameters of rock climbing. This year the international jury award the prize to the Czech champion above all for his incredible, cutting-edge climb on the world’s first 9b+, the hardest route on planet earth. This record breaking climb was followed, just two months later, by another 9b+… Everyone knows, this is Magic Adam, the world’s most difficult sport climbs are his. It would be wrong though to believe that there was competition; Giorgio Balducci, the International Jury president, underlined that the jury meeting had never been so interesting and meaningful as this year. For the others in the running for the award were Germany’s Alexander Megos and England’s Steve McClure.

Megos, a mere 20 years old just like Ondra, is the climber who made the world’s first 9a onsight; an outstanding, absolute performance that projected him from his semi-unknown status straight into the history of sport climbing. McClure, or “Strong Steve” as he is better known, is the man responsible for establishing the hardest routes in Britain, an absolute legend in the UK and abroad. Yes, it was not so easy to decide on a winner. Also because Arco Rock Legends was established to recognise not only the climbs but also the style of the climbers, their ability to interpret and communicate the values of climbing. And for all of these – as they explained clearly on stage – it’s all about the climbing passion, joy and beauty. It was nice to hear Megos say that what counts most is to climb, regardless of the grade, and that the most beautiful thing of all is to simply reach the base of a route, without worrying too much, and try to climb it. Of course, if you manage to onsight it then that’s even better still, as you don’t need to climb it again! The youngster certainly displayed his personality with ease. Just like Ondra. The shy young boy we met years ago has grown up and it was fantastic to hear him talk about the happiness that he gets from his climbing. His thoughts were compelling and engaging!

Talk about things being compelling: it was truly exciting to see Angela Eiter back on the Arco Rock Legends stage once again. The queen of Lead, along with Mina Markovic and Jacob Schubert, had been nominated for the La Sportiva Competition Award which she had already won years ago, during the first edition. She had been nominated due to her victory in the Lead World Championship (for the 4th time) and her record 6 Rock Master victories. With her usual smile Eiter told how she has decided to retire from competitions and will now dedicate more time to climbing outdoors and teaching climbing to young children. She also mentioned that her fondest competition memory was her first Rock Master win in 2003. This was a sincere tribute to Rock Master and Arco, which shows just how important this town is to the climbing world. Arco really is the home of climbing, and of champions. Just like Jacob Schubert, who confided that he had been moved while watching the intro video. The reigning Lead World Champion is certainly the man to beat… Yet, as we mentioned, it was Mina Markovic who won the La Sportiva Competition Award. Deservedly so, we might add. Because apart from being an exceptional athlete, Mina is an indication as how much one can grow and progress with a sport, and how real commitment can reap rewards. Having said that, we never tire of repeating ourselves: being nominated for Arco Rock Legends is synonymous with absolute excellence. Just glance at all the names of those who have been nominated for these 8 editions… yes, because Arco Rock Legends and this special evening testify the history of climbing.

Motivation Climbing Ambassador by Aquafil 2013 - Paraclimbers
"To the Paraclimbing athletes who through their courage, strength and passion, in life as in climbing and on the competition walls, are an example and stimulus to everyone."

JURY MOTIVATION
Salewa Rock Award 2013 - Adam Ondra
"For the immense capacity to continually invent new challenges, to exceed them and to exalt the beauty and the meaning of climbing."

La Sportiva Competition Award 2013 - Mina Markovic
"For the power, tenacity and sportsmanship expressed in both Lead and Boulder competitions. A great example for the entire sport of climbing."