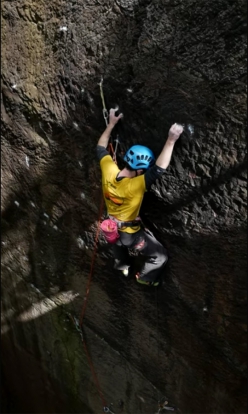 There’s much talk about trad climbing, far less though does one see what actually happens when trad gear doesn’t hold and how dangerous, at times, trad climbing can actually be. Here James McHaffie, one of the most expert British climbers, attempts an old project at Nesscliffe in Shropshire, England but falls off the last hard move. Up until this point the climbing, were it on bolts, would be in the region of 8c, and as McHaffie falls his two hooks rip and he is held by a wire and two good friends. It’s worth noting how the helmet is ripped off the by the rope as this stops his fall.