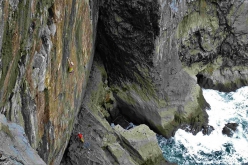 Good weather has resulted in a series of hard trad repeats in Wales by the likes of James McHaffie, Angus Kille, Emma Twyford, Gérome Pouvreau and Florence Pinet.

Summer is far from over but the spell of good weather has resulted in a number of notable repeats across Wales. First off the mark was James McHaffie on Master's Wall, the trad masterpiece put up by Jerry Moffatt high on Cloggy in North Wales. McHaffie'd success came about after his "truly life-changing” onsight attempt in 2000 that almost killed him: stranded at circa half-height, unable to go either up or down the 19-year-old untied, dropped his ropes and waited for half and hour while his partner ran to the top. McHaffie clung on, in the sun and with bleeding finger tips waiting for the ropes to be thrown down from above. Harrowing, on a route McHaffie now rates as one of the most serious leads he has ever done.

A few days later and just a few meters to the left, Angus Kille managed to pull off a rare ascent of The Indian Face E9 6c. The mere handful of repeats are testament to how dangerous and tricky the climbing is on this huge psychological slab testpiece established by Jonny Dawes in 1986. Kille practiced the route on his own on a fixed rope a few times before taking the sharp end and placing all the very poor gear on the lead.

Remaining in Wales, but travelling south to Pembroke, it’s worth noting that the historic (and also somewhat controversial) The Big Issue is quickly becoming one of the most popular E9’s in the entire UK. First ascended at Bosherston Head by John Dunne in 1996 after having removed the bolts placed originally by Pete Oxley in demonstration that the route could be climbed clean, it was first climbed with gear placed during the actual ascent by Japan’s Yuji Hirayama (after abseil inspection). In 2017 Ali Kennedy, Jacopo Larcher, Roland Hemetzberger and Barbara Zangerl, James McHaffie and Ryan Pasquill all followed suit, and now Emma Twyford has joined this list, becoming the first British woman to repeat this fearsome and steep line. In 2013 Twyford became the second woman to climb E9 after Hazel Findlay with her ascent of Rare Lichen at Ogwen Valley, while earlier this year she repeated the E9 Once Upon a Time in the South West at Dyer's Lookout.

Pembroke has also been the preferred destination for French couple Gérome Pouvreau and Florence Pinet who have made some remarkable repeats: both climbed The Big Issue, Chupacabra and Point Blank, placing gear on lead, while 2001 World Champion Pouvreau also made short work of Muy Caliente. They began their climbing holidays with a rare ascent of the emblematic The Quarryman in the Llanberis slate quarries, with both climbers leading all pitches. Not bad for a first trip to Wales!

It’s important to enjoy the climbs you choose to do whilst trying hard! I have my game face and my savour the moment and be happy face. Big issue (e9 6c) is one of the most aesthetic and iconic lines in Pembroke I have ever climbed. Having come close last year with the gear in I decided to try it this year placing the gear apart from having the peg tied off. The location is truly special and intimidating but more than anything I’ve really enjoyed the process of trying this route and the camaraderie with @madeleine_cope @simonrawlinson @rfrugtniet and @matt_helliker. It’s so fickle for conditions but it makes the challenge more entertaining! Thank you @matt_helliker for the patient belay and @j.bunney for the @patagonia_climb @patagonia @patagoniaeurope @dmm_wales @scarpa_uk @climbskinspain @frictionlabs

17.09.2009
Huntsman's Leap, rock climbing in Wales
With almost 60 routes on its East and West Walls, Huntsman's Leap is one of the most popular sea cliffs in Pembroke, Wales.