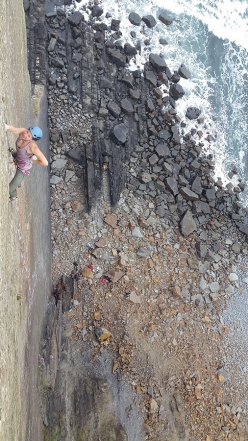 Madeleine Cope repeating Once Upon a Time in the South West, Dyer's Lookout, UK
Photo by James McHaffie 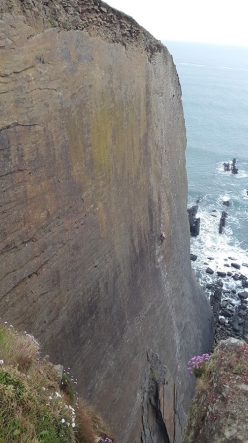 Madeleine Cope repeating Once Upon a Time in the South West, Dyer's Lookout, UK
Photo by James McHaffie

Walk of Life has been repeated at Dyer's Lookout in Britain by James McHaffie, while he, Madeleine Cope and Emma Twyford have repeated Once Upon a Time in the South West. Graded E9, these are some of the finest and most fearsome trad climbs in Great Britain.

The smooth sheet of rock at Dyer's Lookout in North Devon is home to some of Britain’s finest, most difficult slab climbs. Rarely visited for obvious reasons, recently the strong trio comprised of James McHaffie, Madeleine Cope and Emma Twyford made their way to the tidal crag and pulled off some some extremely impressive leads.

McHaffie made a cool-headed repeat of the never-ending Walk of Life, the route first ascended by James Pearson in September 2008 and repeated at the start of 2009 by Dave Macleod and in 2010 by Dave Birkett. The climb checks in at E9 6c, or "8a+/soft 8b" climbing on marginal trad gear and McHaffie’s ascent was done headpoint style, i.e. after having worked the moves on toprope first.

Emma Twyford and Madeleine Cope adopted the same tactics before repeating the nearby Once Upon a Time in the South West, first ascended in November 2010 by Birkett on the lefthand side of the slab. Graded E9 6c, these join only a handful of other female E9 ascents.