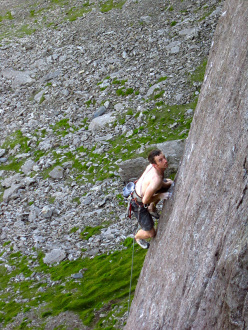 On 9 July James McHaffie made the fifth ascent of The Indian Face, E9 6c on Cloggy, Wales.

To all British climbers the title is worth more than a thousand words. On Tuesday James McHaffie successfully climbed The Indian Face, the route which more than any else has come to represent the epitome of British trad climbing, where the combination of objective dangers and technical climbing render this a test for the elect few.

First ascended back in 1986 by Johnny Dawes (and discussed at length in our interview), this lonesome journey up the Great Slab on Clogwyn Du'r Arddu - better known as Cloggy - offers aleatory technical climbing and very poor and extremely runout protection, so much so that until Tuesday it had only been repeated by Nick Dixon and Neil Gresham in 1996, and by Dave MacLeod in 2010. Put in other words, a mere five ascents in over a quarter of a century.

McHaffie's success came after a short abseil inspection in the morning and a previous attempt, a decade ago, which itself is a story within a story: stranded at circa half-height, unable to go either up or down McHaffie untied, dropped his ropes and waited for half and hour while his partner ran to the top. An experience described by McHaffie as "truly life-changing" as he clung on, in the sun and with bleeding finger tips waiting for the ropes to be thrown down from above.

On Tuesday 9 July thankfully things ran smoothly and McHaffie's repeat is testament to his amazing skill, both physical and psychological, which place him right there amongst the absolute "masters" of British rock climbing.