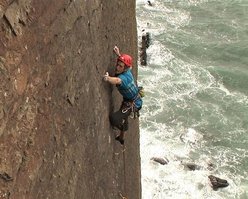 James Pearson on the first ascent of The Walk of Life, E12 7a at Dyer's Lookout, North Devon, England.
Photo by Hot Aches productions

James Pearson leads The Walk of Life E12 7a

On 29 September James Pearson made the first ascent of 'The Walk of Life' at Dyer's Lookout, North Devon, at E12 7a a strong contender for one of the hardest trad routes in the world.

22 year old James Pearson has just succeeded on his hardest project to date, the first ascent of "The Walk of Life" at Dyer's Lookout, North Devon. The 48m route takes a bold line up the extremely blank seacliff and is in fact a straightened out version of “Dyer Straits”, an E8 first climbed by none other than Ian Vickers, the British super talent who was also crowned European Lead Champion in 1998.

Vickers' route climbs the arete to circa half-height, then weaves left into the face with 13 pegs for protection. Pearson touted with the route for 4 years, first removing the rotten pegs, then working on the desperate, direct start which constitutes the physical crux. Success eluded him during his first redpoint attempt, when the Englishman fell from the upper section, only to be miraculously stopped by a micro cam after a 20m lob. Pearson held his nerve and on 29 September freed the route in a daunting 45 minute stint, describing the line as "the hardest I've ever climbed and far harder than any other route I've tried."

In 2007 Pearson made the first ascent of "The Promise" E10 7a at Burbage North, while in early 2008 he took gritstone extremes to a different level with his first ascent of The Groove E10 7b at Cratcliffe Tor. In March 2007 he made the world's first flash ascent of a confirmed Fb8b boulder problem, Ganymede Takeover at Brione, Switzerland. Later that year repeated this performance on "The Great Shark Hunt" at Chironico and "Schule des Lebens" in Switzerland's Ticino. The Walk of Life is the first route in Britain to officially breach the E12 grade.

Perhaps the following is superfluous, but it's certainly imporant to understand the this new frontier explored by Pearson is exclusive and, to use an eufanism, aleatory. E12 7a translates into something without parrallels in terms of commitment, difficulty and danger, where danger really does mean what springs to mind. Those who have ears to hear...