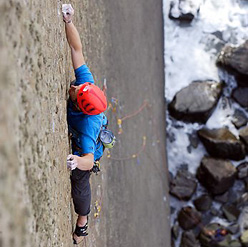 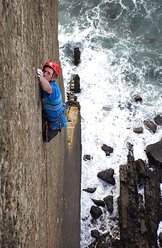 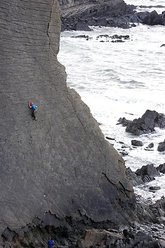 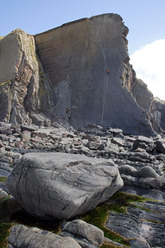 James Pearson interview after the Walk of Life

Exclusive interview with James Pearson after his first ascent of The Walk of Life E12 7a at Dyer's Lookout, North Devon, England.

On 29 September James Pearson carried out the first ascent of "The Walk of Life", an extremely dangerous 48m trad line up the concave Dyer's Lookout slab in North Devon. The Englishman's ascent came about after 4 years of effort during which, in his attempt to climb as pure and clean as possible, he removed all in situ gear and discovered the key to a bold, bouldery start to climb the face direct.

Circa a month before the successful ascent, Pearson survived a harrowing 20m fall onto a micro cam. Digging deep into his inner self, the 22-year-old then went for the lead of a lifetime, a lead that lasted for 45 eternal minutes and resulted in his masterpiece, the Walk of Life. At E12 7a this route is obviously a strong contender for one of the hardest trad routes in the world, but what is striking, more than the outrageous grade itself, is the physical fitness and mental conviction needed to pull it all off. In this exclusive interview Pearson shares his inner thoughts and fears.


James Pearson and the Walk of Life
Congratulations James for the tremendous effort on The Walk of Life. Let's start with the thing climbers hate most - your massive fall which was stopped miraculously by a micro cam 20m lower. What effect did this have on you?
The fall was both positive and negative, it allowed me to trust the protection a little more, but it also really shook me up, it damaged my confidence. I have never fallen off a hard trad route before and always felt more confident on the lead. After falling, I began to question my ability. It took a lot of soul searching and personal exploration before I decided I wanted to continue with the project, and put myself back in that potentially deadly situation

You snapped some holds while working the route...
The nature of the rock made the route more difficult than it would otherwise have been. I was careful not to weight holds unnecessarily or intensely and this made the physical climbing a lot more tiring a strenuous. Understanding that there was a high possibility that a hold could break, and in doing so possibly end my life, made me very nervous and added to the ever growing psychological barrier that needed to be overcome.

So the greatest difficulty was psychologically?
Yes, the route was harder mentally than physically. It was physically difficult but I have climbed harder in the past on other routes and boulder problems. Mentally though it was in a different league to anything I had done before and I needed to teach myself how to cope. I needed to work a lot on my fitness, but mainly it was about mental conditioning for the amount of time my mind would be under stress.

When you set off on your successful attempt, what was your state of mind? Did you know what you were really risking, or were you convinced you weren't risking anything?
Usually, when I climb dangerous routes I enter a strange state of mind where I am aware of the consequences of failure but I don't connect them to reality. However, on The Walk Of Life, things were very different. I believe that due to the length of the route, and the sheer amount of time I needed to concentrate for, I was unable to put myself in the previously mentioned mindset and found myself in a terrifying situation, where I was fully aware of the danger I was in.

The route is tidal, conditions can be fickle and timing is important...
The sea was definitely a foe. In every sense it added to the difficulty of the challenge. Due to the tide it was only possible to climb the route for a small section of the day and this would often not line up with the desirable conditions. The bottom of the route would also feel very "soapy" from its regular soaking, only feeling reasonable on days with a good wind and zero humidity.
On the day of the lead, I waited as long as possible before setting off to allow the route the best chance to dry out. From the amount of time I had spent on the route in the past I had a good idea of the latest time I could set off, but due to the stresses and strains of the day I lost track of time and when I began to climb, the sea was a little close for comfort. This made me a little apprehensive and I knew I needed to move quickly. At the points I had decided to rest, I pushed myself upwards, fortunately feeling reasonably fit. When tiredness caught up with me, I tried to be as disciplined as possible to avoid wasting precious minutes, constantly checking to see if my belayer Rich Mayfield was still OK. The one thing that did ease my mind was Rich's experience. I was sure that he could keep it together at the base for as long as humanly possible, meaning that on this day, at this time, I could climb for as long as possible. If I tried really hard, I could almost convince myself that because of this, the sea was not really a problem at all, and all I needed to focus on was myself.

To some it may seem strange that you removed pegs from an existing route...
I added a direct start to Dyer Straits, a route which only climbed the top half of the main wall as the bottom half climbs via the arête of Earth Rim Roamer. I removed all 13 pegs from the upper half because they were in a terrible state and were no longer trustworthy. The pegs were in such a bad state that the route was no longer possible, at least, not at a similar lever of danger to how it was originally climbed. In removing the pegs and climbing The Walk of Life I felt like I was giving something new, rather than taking something away. For the record, the pegs were not placed by Ian Vickers, they were placed before he made his ascent way back in 1994 by Andy Donson who agrees completely with my actions.

You had initially planned to simply replace the pegs though.
Yes, but I soon realised that it could and should be done without. Times and ethics are changing, we need to move forwards and climb in ever purer styles. In my opinion, pegs have a mainly negative impact on traditional climbing and their use should be avoided.

Is this general consensus?
The view on pegs on British sea cliffs changes from climber to climber. Currently, there are discussions taking place about the official future stance on this issue. I personally hold the opinion that all pegs should be removed and not replaced. Routes would then be re-climbed and re graded in their new state but the original names would remain.

Would it be fair to say that cutting edge trad aspires to ever-increasing danger?
I don't know if I can say what "trad" in general aspires to or which direction it's heading to, but my trad lines simply need to inspire me. The difficulty and danger of each line need to be dealt with in appropriate ways, but as long as the line inspires me, I will do whatever I need to complete it.

Except...
Taking reckless risks. If I didn't believe I could climb a dangerous route, I would not attempt it. However, I would train to become fitter, better and stronger so I could eventually climb the route.

There are lots of other hard routes out there, not just yours.
If I find another person's route inspiring, then I will try to repeat it. I certainly wouldn't climb a route just for the grade or the "tick".

What role do the media and your sponsors play in all this?
Fortunately I feel no pressure from either the media or my sponsors to climb bold or dangerous lines.