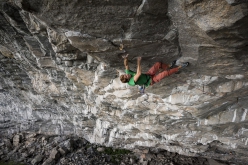 Seb Bouin repeating Move at the Hanshelleren cave in Flatanger, Norway, established in 2013 by Adam Ondra.
Photo by Raphael Fourau

Seb Bouin from France yesterday made the first repeat of Move at the Hanshelleren cave in Flatanger, Norway, established in 2013 by Adam Ondra.

Two months after making the first repeat of the 9b Mamichula at Oliana in Spain, France’s Sébastien Bouin has now repeated another Adam Ondra testpiece, namely Move at the huge Hanshelleren cave at Flatanger in Norway.

Bouin had actually belayed Ondra during his first ascent in 2013 and as he stated "now it's my turn." He started working the line in 2016, and travelled to Norway on five separate occasions prior to success. "I did 4 travels alone. This means I started alone from France and tried to find partner at the crag. It's quite hard mentally to do that, because you’re under pressure to do the route during the trip, but you have to deal with it on your own. And being alone means you’re never sure that you’ll actually find a partner to climb with. But it's a superb opportunity to meet people and share your passion and emotions with."

Bouin decided to concentrate on Move "because it's a MEGA LINE, it's hard and beautiful, and I was inspired." Belayed by another traveling climber Henning Wang, after his redoint Bouin commented "About the grade, it’s the hardest route I’ve ever done. I have no experience in 9b+ grades. So it could be easy 9b+ (Adam considered 9b+ but suggested 9b/+ because this route doesn’t really suit his style) or super hard 9b. I think the 9b/+ grade could be the right one. Let see with the next repeats."

At the time of the first ascent, Move was Ondra’s third 9b/+ in the Hanshelleren cave after Change, the world's first 9b+ freed in October 2012, and Iron Curtain 9b freed in August 2013. In 2017 Ondra then upped the ante and freed Silence, the first and currently only climbgraded 9c. I.e. the most difficult sport climb in the world. Bouin concluded "Now it's time to… check another project. The one to the right looks like a good one! It's called Silence…"

26.08.2013
Adam Ondra and the Move video
The video of Adam Ondra making the first ascent of Move 9b/+ at the Hanshelleren cave Flatanger, in Norway.

23.08.2013
Adam Ondra frees another 9b in Norway
Czech climber Adam Ondra has made the first ascent of Move 9b at the Hanshelleren cave in Flatanger, Norway.

05.08.2013
Adam Ondra frees new 9b at Flatanger in Norway
At the Flatanger cave in Norway Adam Ondra has made the first ascent of Iron Curtain 9b.

08.03.2013
Video: Adam Ondra climbs Change 9b+ at Flatanger
The video of Adam Ondra and the first ascent of his route Change 9b+ in the Hanshellern - Flatanger cave in Norway.