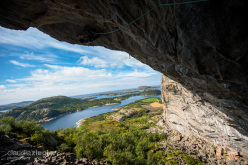 Adam Ondra making the first ascent of Move 9b/+ at the Hanshelleren cave in Flatanger, Norway (08/2013)
Photo by Claudia Ziegler

Adam Ondra and the Move video

The video of Adam Ondra making the first ascent of Move 9b/+ at the Hanshelleren cave Flatanger, in Norway.

Another 9b! Some might be bored by this news, but not writing about this performance by Adam Ondra would be as if a sports mag decided to ignore a new world record by Usain Bolt, a new medal by Francesa Pellegrini or another victory by Valentino Rossi.

So here's a video of the "usual" Adam Ondra getting to grips with his latest creation, Move 9b/+ in the Hanshelleren cave at Flatanger in Norway. A video shot at the moment, a nude and crude testimony without any special effects that highlights Ondra's redpointing hythm and above all his speed. The film demonstrates Ondra's millimetric precision on more than 50m of climbing. Ondra flies upwards, making the 9a section look like 7a...