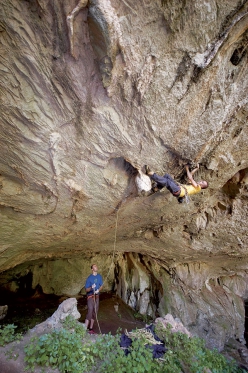 Simone Sarti a driving force behind the climbing development at Domusnovas. Here he is seen climbing Underground (7c+)
Photo by Maurizio Oviglia 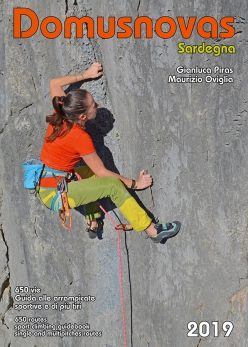 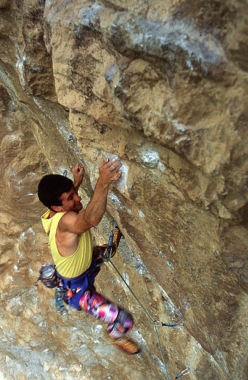 Maurizio Oviglia climbing Obelix in 1993, one fo the first 8a at Domusnovas
Photo by Mattia Vacca 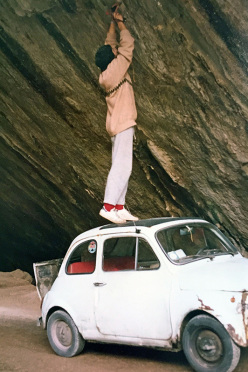 Mondo Liggi, an early pioneer of sports climbing in Sardinia. Here he's pictured on the roof of his Fiat 500, placing the first bolt by hand to what would later become Marina Superstar, in 1981 circa
Photo by Alessandro Cattaneo

Maurizio Oviglia introduces the new climbing guidebook to Domusnovas, in the south-west of Sardinia, one of the 'historic' sport climbing areas on the Italian island.

The new climbing guidebook to the area called Domusnovas in south-west Sardinia, one of the "historic" sport climbing areas on the island, is now available. More than 650 single pitch sport climbs and multi-pitches in 34 crags, enclosed in only 5 square kilometers. There’s a variety of styles that is unparalleled throughout the rest of Sardinia, from 4a slabs to a 9a+/9b overhang (the first in Italy) freed by Adam Ondra. The guidebook was compiled by the two most prolific new routers in Sardinia, Gianluca Piras and Maurizio Oviglia, and sponsored by local businesses from where it can be purchased.

Sport climbing in Sardinia was probably born in Domusnovas, if it is true that the first bolts were placed on the area’s limestone by Mondo Liggi, unquestionably the pioneer of sport climbing on this island. At that time cavers were also a little bit rock climbers and vice versa, probably because climbers always explorer the numerous Domusnovas grottos even when climbing and caving became two distinct activities.

In the eighties climbing started at Domusnovas in 1987, but it was only in the nineties that this area experienced its true golden age. During those years the crags were certainly the most popular in Sardinia, even if Domusnovas dosen’t have the sea close by or the amazing Supramonte. But the many cliffs offered rock and a variety of styles that made it one of the most interesting throughout Italy.

In those years the hardest routes were attempted by all the best national and international climbers, including Adam Ondra, currently the best climber in the world. In the Grotta di San Giovanni cave Ondra made the first ascent of the hardest route he had ever climbed at that time, suggesting - for the first time in Italy - the grade 9a+/b.

It’s impossible to mention all those responsible for this international climbing paradise, we would risk forgetting someone. All we will do is say that we were there when the first routes were established and we are still here today, in a moment when the crags need to re-bolted, restored and relaunched: our constant commitment to bolting and maintaining routes for the past 30 years now needs your support. So that this commitment can renew itself and brush off onto new generations, ensuring that climbing doesn’t abandon the natural environment but, on the contrary, manages to appreciate the added value of being outdoors.

Domusnovas, Sardinia
by Gian Luca Piras and Maurizio Oviglia
The guidebook was financed by: B&B Pedra Rubia, Il Castello di Gioiosa Guardia, Il Pomo d’Oro, Saluti &Trigu, Bar ristorante Temptation at Domusnovas, the climbign shops Outdoorsportsardinia in Cagliari and Turco at Carbonia, the climbing gym Quartu V10 and by Petzl. The authors wish to thank the Sardian Mountain and caving rescue service. The guidebook can be purchased at the shops mentioned above or via the website www.pietradiluna.com

25.11.2014
Climbing in Sardinia news: developments at Oliena and Domusnovas and the multi-pitch Malala Day
In his regular rock climbing in Sardinia update, Maurizio Oviglia talks about recent developments at the crags Oliena and Domusnovas and the new multi-pitch granite climb Malala Day at Locherie (Onifai).
30.05.2003
Domusnovas Endurance climbing
The Comune of Domusnovas, Sardinia organised a meeting a few days ago to promote the Iglesiente area, its 600 routes and the enormous San Giovanni cave.