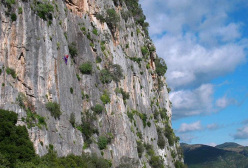 Sandro Buluggiu climbing Shangai, one of the classics of the crag Chinatown, Sardinia
Photo by Maurizio Oviglia 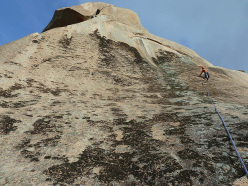 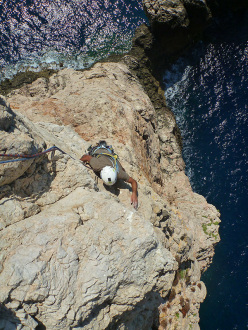 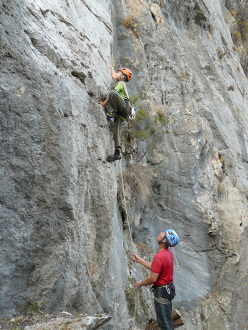 Climbing in Sardinia news: developments at Oliena and Domusnovas and the multi-pitch Malala Day

In his regular rock climbing in Sardinia update, Maurizio Oviglia talks about recent developments at the crags Oliena and Domusnovas and the new multi-pitch granite climb Malala Day at Locherie (Onifai).

There are plenty of crags in the Domusnovas district and are many and one off the oldest is certainly Chinatown. As in almost 1980's crags, the routes climb good grey rock and are fingery and often somewhat tricky. This is why many of these crags were quickly abandoned as climbers turned their attention to the yellow overhangs to the left (sector Rifondazione Strapiombista) that, as the name implies, marked the birth of a new era. Within a few years even this sector also did not seem (overhanging) enough for the new generations, who moved on elsewhere in search of more difficult challenges...

About 10 years ago I tried to revive the sector with the addition of several new routes, but to no avail. I bolted them on my own, during the week, as no one was willing to accompany me. Furthermore, the 25 minute approach discouraged (!) climbers who preferred to go elsewhere, with easier walk-ins. The new sector Broadway (bolted about 5 years ago) did little to change things, despite offering some really beautiful routes in my opinion. When all hope seemed lost, people began to flock back to the "old" crag, so much so that this gradually became one of the most popular (if not the most popular) in the Domusnovas area. What makes climbers flock to to one area or another would be difficult even for a (climbing) sociologist to understand ... the fact of the matter is is that with this rekindled interest, route setters are now back on track sorting out the old routes and adding some new ones. Gianluca Piras has always been one of the most generous new routers on the island and has sorted out several routes of the central sector, rebolting them and completely recreating the sector Rifondazione Cinese (just to the right of Rifondazione Strapiombista). For my part, I sorted out and added some new pitches to Rifondazione Strapiombista aimed primarily at those who don't climb the upper extremes. The list of the new routes is published below and adds to those already published in the latest Pietra di Luna guidebook.

The sector Music Land (Oliena) has been valourised by the Neumann family who regularly travel from Germany to Sardinia on holiday. This superlative grey band of limestone hosts some beautiful routes and is located deep within the magical Lanaitto valley. After the routes put up by the Germans, Gianfranco Boi from Oliana added some more. Below is the updated list of routes, it is worth remembering that the bolts are often fairly run-out and that according to some locals, the grades provided by the Neumanns, unlike the bolting, particularly generous…

As to new multi-pitch routes: Fabio Erriu and I established a new climb up the beautiful structure Locherie peak (Onifai). Unlike the neighboring Blonde Sardinia, this new route is completely bolted as apart from a 10m crack, it ascends a solid granite face. The route was named Malala Day and is dedicated to Malala Yousafza who received the 2014 Nobel peace prize.

The SW Face of the island of Foradada (Capo Caccia, Alghero) hosts a route climbed in completely different style by Marco Marrosu and Filippo Derudas on 31 August, 2014. Sfida al Mistral was climbed in traditional style, 3 pitches long and 90m high, with difficulties VI-/VI, R1+. The gear needed for a repeat is as follows: : 3/4 universal and blade pegs, friends, a selection of mid-size nuts, slings. The start of the route is marked by a sling and small arrow, while the descent is carried out via two 35/40 m abseils down the SW arête. Pegs and slings left in-situ.

Thanks to the Neumann family, Gianfranco Boi and Gianluca Piras of Georock