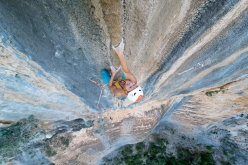 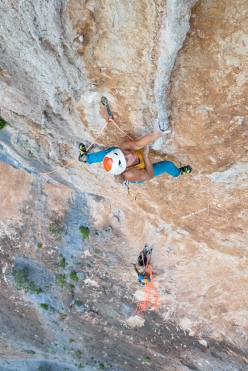 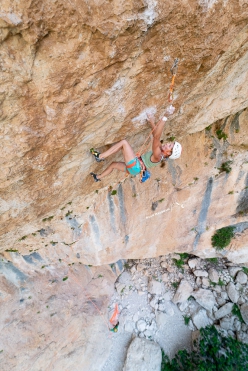 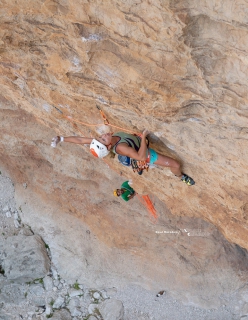 After having repeated the famous Hotel Supramonte in October 2019, Aleksandra Taistra has now repeated two tough multi-pitch climbs in Sardinia. The 38-year-old Polish climber set the ball rolling in June with a smooth ascent of Unchinos, a six-pitch outing established ground-up at Badde Pentumas by Luca Giupponi and Maurizio Oviglia between 2016 and 2017 and freed by Giupponi in 2017 with difficulties up to 8b.

After Covid-19 isolation, Taistra initially worked the route on her own but soon realised this was inefficient in the steep overhangs. She joined forces with Gianfranco Boi and invested a further 6 days on the line, then when temperatures suddenly dropped on 15 June she completed the redpoint.

Taistra commented "The whole route is very interesting and continuous with long traversing pitches that avoid the ledge systems of the wall, making for a complete route. In style it offers a bit of everything from typical sport climbing in first pitches and more like mountain climbing with loose rocks in the next part. The final pitch 7b+ is crazy interesting with one huge runout (watch out to not break anything there because falling could be not nice ;)"

Galvanised by this ascent, a few days later she travelled to wild Monte Donneneittu to try her luck on Amico Fragile, the 230m 8b first ascended by Marco Vago, Simone Pedeferri, Fabrizio Fratagnoli and Matteo Della Bordella in the years 2005 and 2006. She briefly worked the 8b crux pitch with Boi and then returned on 25 June along with her boyfriend Read Macadam, initially only to show Macadam the spectacular 50m crux, but things turned out rather differently: after carefully negotiating the run-out starting pitches, motivated by her climbing partners she spent the next 90 minutes battling her way up the huge tufas.

This unexpected success meant that the only way was up, despite the fact that she hadn’t checked these pitches out beforehand. Macadam cleaned the next pitch, a “stubborn” 7b and Taistra then redpointed it first go, while the final 6a, 6b+ and 6a+ pitches on brilliant grey slabs in the full-blown sunshine proved much harder than she had expected. Taistra persevered though to redpoint what she has described as "one of the best multipitches I have ever tried" adding "I’m surprised that Amico Fragile has seen so little action because it really is a stunning line" before concluding "big respect to the first ascensionists of both multi-pitch routes that I climbed. It was a big pleasure to improve again."