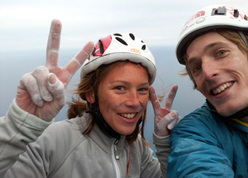 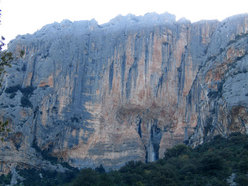 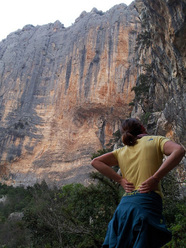 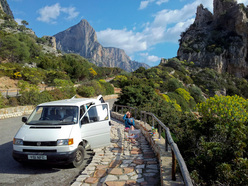 Caroline Ciavaldini and James Pearson have repeated Mezzogiorno di Fuoco (8b, 270m) at Punta Giradili and Amico Fragile (8b, 230m) at Monte Donneittu in Sardinia.

After their recent climbing trip to Spain, Caroline Ciavaldini from France and James Pearson from England are currently in Sardinia where, before the current downpours, they made quick work of two of the island's hardest multi-pitches, the 8b routes Mezzogiorno di Fuoco and Amico Fragile.

Mezzogiorno di Fuoco was established in 2006 by Rolando Larcher, Maurizio Oviglia and Roberto Vigiani and freed a year later by Larcher up Punta Giradilli, while Amico Fragile was put up by Marco Vago who, together with Simone Pedeferri, Fabrizio Fratagnoli and Matteo Della Bordella in 2005 and 2006, climbed this exposed line up the wild Monte Donneittu (Codula de Luna). Both routes were established ground-up and are considered two real gems, characterised by splendid climbing mixed with long run-outs and hard obligatory sections which should not be underestimated.

Pearson and Ciavaldini repeated both routes in a single day, climbing all the pitches free. While Ciavaldini needed several runs at redpointing the crux pitches of Mezzogiorno di Fuoco, Pearson managed to climb them straight off and the two needed 11 hours in total, commenting afterwards "a thanks to the first ascentionists, a masterful effort in establishing this jewel." Pearson nearly missed on-sighting Amico Fragile, for after having on-sighted the crux 8b pitch, he slipped on the following 7b.

The two climbers plan to stay in Sardinia until the end of the month "to explore the difference of ethics between equipping a route from the ground-up or from rappel, and to see how this decision affects future climbers experience." It's highly likely that there is more to come. Weather permitting...


- Rock climbing on Punta Giradili, Sardinia
Punta Giradili, described by many as one of Sardinia's finest sea cliffs, is breathtaking. It offers fantastic climbing and stunning views onto the Mediterranean sea over 400m below.