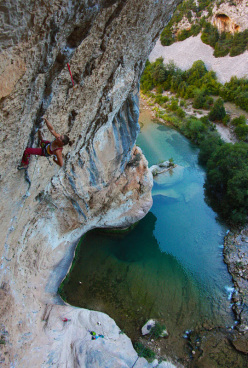 Aleksandra Taistra has joined the exclusive club of women (and men for that matter) capable of sending 8c+! Having four 8c's under her belt, the 30-year-old Polish climber decided the time had come to push the ante once more, and the choice fell on the extraordinary Così Fan Tutte 8c+, located at the Piscineta sector in Spain's Rodellar and which had been repeated in summer 2011 by America's Sasha DiGiulian.

"My first attempts date back to 4 years ago" explained Taistra "when I was climbing 8b+ but I always believed I would succeed and so did Serge Casteran, the first ascentionist, who kept convincing me saying "You can do it!". I was on top form this holiday and very lucky because I finally my summer project. I'm very happy because it was tough, not only physically but most of all mentally - those who've climbed here know why! Cosi Fan Tutte has changed over the years and evolved to 8c+. Holds have broken, not only off the crux itself (which has become much more difficult) but also along the whole route. Cosi offers 55 metres of tough climbing with an obvious crux after L1 (a beautiful 8a+ in its own right), some more difficult climbing further up, and then the demanding, psychological finish from where many experienced climbers have fallen off. Do I need to mention the route's splendidly location? Without a doubt it's in the most charming crag I've ever seen, Piscineta, the best sector in Rodellar!”