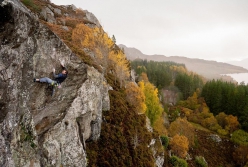 Robbie Phillips has established 'What we do in the shadows’, a new E10 7a which adds a direct finish to Nosferatu at Duntelchaig in Scotland. Shortly after the first ascent Dave MacLeod completed the second ascent.

British trad is currently enjoying an exciting resurgence at the top end of the game and after Neil Gresham’s Lexicon in the Lake District, it’s now the two Scottish grand masters Robbie Phillips and Dave MacLeod who at Duntelchaig close to Inverness have climbed What we do in the shadows. This adds a direct, fierce bouldery finish to Phillips’ Nosferatu and with French 8c climbing, on trad gear, now checks in at E10 7a.

Phillips first started working the line in summer 2020 and was joined on various occasion by MacLeod, but then winter set in and other commitments forced them to turn their attention elsewhere. Phillips returned this autumn and managed to toprope the line clean five times; two excellent totem cams provide the main protection but key to success proved the discovery of a small cam on the side which in the words of Phillips "pulls you rightwards and you avoid slamming into a huge slab of rock which would make the final moves very scary."

After taking two falls from the crux - which happens to be the final sequence to reach the lip of the roof - Phillips managed to stick the move, and shortly afterwards MacLeod checked in with the smooth second ascent. Both climbers placed the gear on lead, downclimbed to the ground and rested before climbing to the top in a single push.

26.02.2020
Robbie Phillips sends shallow water solo of Edinburgh bridge crack
Buildering in Scotland: after the first ascent of a hand crack below a bridge in Edinburgh, Robbie Philips has now returned to make a free solo ascent.

18.06.2019
Dave MacLeod coasts along The Golden Road in Scotland
Scottish rock climber Dave MacLeod has made the first ascent of The Golden Road. Located at  Creag Mo on the Isle of Harris, Outer Hebrides, this trad climb checks in at E9.