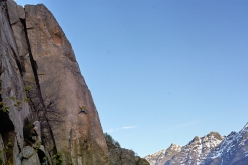 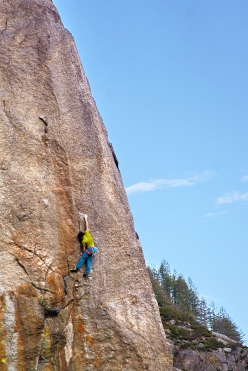 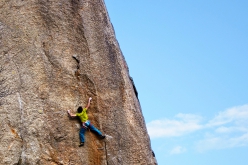 On Torre di Aimonin in Italy’s Valle dell’Orco Swiss alpinist Silvan Schüpbach has made the first ascent of 'Know your cat', a new trad variant to the rock climbs Know yourself and Cani & Gatti

A few years ago up in Italy’s Orco Valley Rolando Larcher freed two climbs, his own Conosci te stesso? - Know yourself and Cani & Gatti, established by Maurizio Oviglia and Paolo Seimandi.

Both are located on the slender Torre di Aimonin and in April Switzerland’s Silvan Schüpbach managed to climb a combination of these two routes to create Know your cat. After having identified the line, Schüpbach cleaned and tried the moves for 5 days, then on 27 April 27 he made the first ascent.

"The route is 50 meters long and offers varied climbing: crack climbing, corners and technical face climbing, up stellar rock and past great moves. Approximately 8b" explained Schüpbach, adding "For the free ascent I had placed two peckers from above with the hammer, and since there are already some insitu nuts and a thread, it seemed logical to climb it pinkpoint style. If someone wants to climb it ground-up, placing all the pro, of course they’re free to to do so ...

In any case, I climbed without bolts to show that it's possible to do without. The valley still offers enormous potential for prime granite climbing, it would be nice to reduce the use of bolts to the maximum. This is the only way to ensure that the Orco Valley remains such a great playground for adventure."