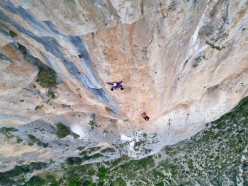 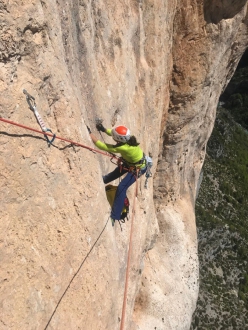 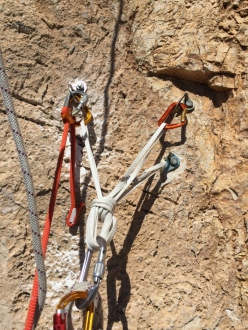 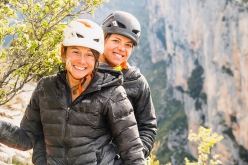 Swiss climber Nina Caprez reports about her efforts to rebolt parts of Mingus, the 300m multi-pitch climb in the Verdon Gorge, France, first freed onsight by Lynn Hill in 1994 with difficulties up to 8a.

Mingus in the Verdon Gorge is one of the most famous and at the same time fabled rock climbs on these smooth limestone walls in southern France. First ascended in 1986 with the use of aid by Christophe Froifond and originally graded 7a+/A0, it was freed in 1994 by none other than Lynn Hill who did so in the finest style possible: onsight.

Hill’s success, absolutely outstanding and even to this day underrated, was overshadowed by her groundbreaking first free ascent of the Nose on El Capitan which had come about a year previously, and she used this 12-pitch, 300m climb as part of her training prior to her legendary single day free ascent of the Nose in September 1994. Despite its status, free repeats of Mingus over the last quarter of a century are few and far between, in part due to 8a difficulty, in part due to the original 8mm bolts that direly needed replacing.

Over three days this month Switzerland’s Nina Caprez teamed up with America’s Ann Raber to replace some of the worst of the old gear along the pitches, add a new bolt to each belay and start restoring this historical masterpiece to its former glory. She also nabbed a fast repeat with climbing partner Sam, on her last day in one of her favourite places in the climbing universe. Here’s the lowdown.

One of my favorite places on earth: the Verdon gorge by Nina Caprez

As so often when I live climbing at its most sincere and simple state, I find that routes call me. And so did Mingus. This is a funny story: one night at the "La Palud gypsy camp" I ran into my ex-boyfriend Benoit and his climbing partner Leo. They had climbed Mingus together two days before adopting a mixed style of free and aid-climbing. Since I know Benoit really well, I could tell that this route meant something to him and as they both talked about that historic route with their eyes bright as the sun, I was overcome with excitement.

And so I started to look up Mingus in the guidebook and it’s true, it’s the only route that has an entire page to itself, and the introduction has a little eye catcher with my climbing partner Lynn Hill. The guidebook says the following: "The hardest route on Escalés? Anyway, over the years, Mingus remains a Verdon myth, very much ahead of its time. From the first ascent free and on sight by Lynn Hill in 1994 (a world class event which, remarkably, has gone unnoticed!) the route has not been often free climbed as a whole (Y. Cocurtes in 2004). The climbing style is rather technical and fingery and the equipment is not up to modern standards."

I got very excited about the idea of free climbing this route and so I talked to Graou about it while eating some mushrooms and showering at this place. He recommended re-bolting the route first in order to stay alive and so I did. Ann, my partner, was in without hesitation and equipped with Graou’s power-drill and some bolts we found in la Palud, we started our mission the next day.

Rebolting such a historical route is a delicate affair. To be honest, I did not ask all the climbers whether they agreed or disagreed, I simply went for it after checking with Graou, Greg and Pascal, people who live and bolt a lot in La Palud. It was very important for me to do my best and preserve the spirit of the route. My simple goal from the beginning was to make the route safe by adding a 10mm bolt at each belay station and by replacing one to three bolts per pitch, where the chance of falling and breaking one of those very old and rusty bolts is high, especially where such a fall could have seriou consequences All the pitons look very good and overall, that 300 meter long itinerary is logical. There is only one confusing spot at pitch 8 where another route crosses and where, obviously, a belay station has been missing in Mingus.

It took us three days, starting from the top and working four pitches per day. I first fixed a static rope and drilled the anchor. Then I rappelled down, climbed the route top rope and replaced the most obvious bolts. Ann’s job was taking out the old bolts I replaced and offering a hand whenever needed. Then we both climbed the pitches we’d been working on ground-up. It’s always something different when you climb at the sharp end and it allows me to see if we took the right decisions. The exchange of ideas with Ann was essential and I think we did a good job. I’m very glad that we made it work because it was so much fun!

Once we completed the job, we took out all our quickdraws. The next day Ann had to leave. I was lucky to find a partner who was willing to try the route ground-up with me. After a rainy rest day, Sam Hoffmann and I left early in order to have plenty of time to climb Mingus. I had no expectations that day, my simple goal was to have fun and to see if Ann and I had done a good job at rebolting the route. But once I freeclimbed the first two pitches, this pleasant game of "sending" overcame me and so the determination button was turned on!

I sent the 8a on my second go (luckily, because it’s a real skin killer), but all the rest went well, on my first go. Some of the pitches I knew well, others less and on the whole I had a good dose of luck!

Gypsy friend Gio joined us from the top and took some pictures while Sam and I climbed on the last pitches. What a rewarding sensation it was, free climbing this historical route with all the support of those adorable friends. Verdon reunites and connects a certain type of people and I feel very honored to be part of that special community!

So now I hope that you will get excited from these words and that Mingus will see many attempts in the future. It’s totally worth the trip and the fight! Hats off once again to Lynn Hill, who climbed the route onsight in 1994.

A huge thanks to Ann Raber who climbed with me almost all spring and who proved to be such a great support all along. Nowhere more than during this rebolting mission. And thanks Sam for the perfect climbing day and high psyche during my free ascent on my very last day in the Verdon. And of course, thanks to Graou for lending me his dear baby called "Drill Machine".

14.08.2018
Tolerance by Nina Caprez
Swiss climber Nina Caprez talks about her recent trip to Lebanon where she joined up with the non-profit organisation ClimbAID to bring climbing to Syrian refugees and Lebanese youth affected by the war.