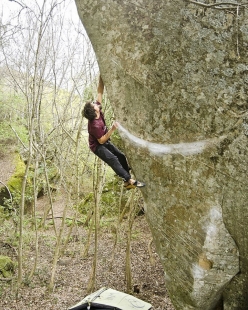 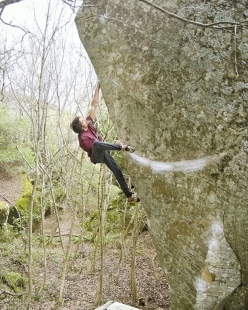 At Pietra del Toro in Basilicata Niccolò Ceria has made the first ascent of Goemon, describing the line as one of the most beautiful boulder problems in Italy.

"One of the most beautiful boulder problems in Italy." This is how Niccolò Ceria, one of the world’s leading boulderers described a problem he freed not at Fontainebleau, nor at Cresciano or Chironico, nor Buttermilks or Rocklands but at Pietra del Toro, way down in Basilicata in Southern Italy.

Two years ago the climber from Biella had travelled to Campomaggiore, following in the the footsteps of Michele Caminati and Mauro Calibani. It was during that trip that he freed the fantastic Geometrie non Euclidee and unearthed a series of different problems, but time ran out and he had to return home with the boulders left unclimbed. One of these was "an amazing arête, tall, beautiful, right at the top of the hill." The "Grampians-style" approach led through lush vegetation to an opening and this magnificent highball marked by "grey rock, compact, simply perfect…"

Ceria and his friend Marco Giorgio patiently brushed the problem, removing the moss only where absolutely necessary. And then, not without difficulties, he tried the upper section on toprope. While the lower moves "to the characteristic smile aren’t difficult, just technical", the crux lies in store right at the top. A small right hand micro-crimp paves the way for a jump to the top, at that point "you’re high up. The photos don’t do it justice. The boulder is 8, 9 meters high and the crash pads below are there to cover the rocks that jut out from the ground. It’s scary and the dyno up there is hard."

Ceria freed the line the other day. "The entire process was amazing, from when I discovered it two years ago all the way to the send, now. I’m not sure what grade to give it but it’s top notch quality stuff. On a par here in Italy with Passo Mambo freed by Mauro Calibani at Meschia, or Trojan Horse put up by Gabriele Moroni in Valle d’Aosta. It’s certainly one of the most beautiful problems I’ve ever climbed, not only here, but worldwide."