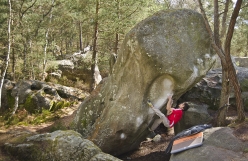 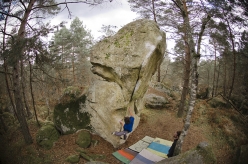 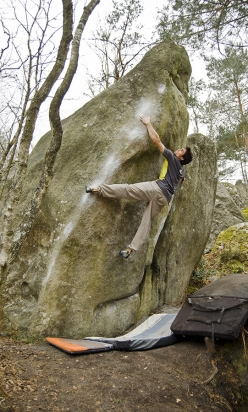 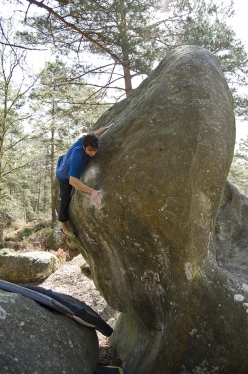 Some of the best, but also most secluded boulder problems at Fontainebleau in France introduced by Italy’s Niccolò Ceria in this report and video after a month bouldering and climbing on his own last spring in the forest on the outskirts of Paris.

It's the line to the right of Menhir and I saw it by chance on the same day as I went to try Menhir. Before that I didn’t know it. Great climbing and a great pinch in the middle of the sequence. Just the right height, really cool moves!

Orange Juice
One of the most hidden boulders right in the middle of the super classic sector that everyone knows, Rocher Canon. I was told about it by a friend, otherwise I would never have noticed it in the midst of all that chaos. Its appearance changes considerably depending on whether there are or aren’t any chalk marks ☺

Monaco
This problem was recommended to me, too. A perfect example of how limitless the climbing is at Fontainebleau and how much it has to offer beyond the usual three places where everyone goes climbing: just a few kilometers away from Bas Cuvier lies this enchanted forest, with no soul in sight and pristine rock.

VDC
Uh, one of the best on this trip apart from the rock that is perhaps a bit too sandy. I’d never seen JVDC before in photos, or read anything about it in guidebooks; while strolling in the Elephant North area it suddenly sprung into view I was taken away by the shapes of the holds and the problem as a while. I decided to return a few days later when it was dry. The boulder is taller than it seems and since I was on my own, with just a couple of old pads, the send was a perfect experience to end that day.

Pierre, Feuille, Ciseaux
One of the best problems I’ve ever climbed in the forest: an independent line without anything else around, a sequence of incredible holds that smoothly and logically follows the arete. More than anything else though, it has the best rock you can find in Font. Her, once again, the fact that I climbed it alone at dusk provided me with one of the most endearing moments of the trip ☺

Menhir
Another not all to popular problem, despite the fact that it was first climbed years ago J. Nadiras. I went to check it out during one of the last days of my trip in 2015, but back then I didn't have the time to go back with pads and I had to give it a miss. This year it was one of the first problems on my list, not only because it’s so incredibly beautiful, but also because all the holds didn’t hurt my injured finger and so I knew it would go down pretty quick.

Saigon
Saigon was the problem that opened my eyes. I’d planned my trip to Font for a long time, but when in mid-February I injured the pulley on my finger at Red Rocks, I began thinking about postponing it. I spent the last few weeks at Red Rocks spotting Nils on his projects and two days of easier climbing were more than enough to make me realize that the problem was really serious. I rested for another two weeks and then decided to go to Font nevertheless. I left home thinking I’d just ​​stay for a couple of days to test my finger, instead of an entire month as originally planned. I woke up on the first morning with a clear idea: I’d go and try Saigon, if my finger hurt then I’d have to go back home, if it didn’t hurt then I’d be able to climb for the rest of the month.

I had never seen Saigon before, except in some videos that showed those super-flat compression holds, ideal for my problem. I reached the block and much to my surprise couldn’t find anywhere to warm up. Warming up a problem this difficult isn’t exactly fantastic, but at Font things are different. The climbing at Font is so intuitive and fluid that it doesn’t matter much if you’re warm or not, in particular on a problem like Saigon. After an hour of attempts I no longer felt rusty and I began to feel ready for the send. An hour later I topped out. At that point I was sure I’d be able to manage my finger injury and stay for a whole month in the Forest ☺

26.10.2015
Niccolò Ceria cruises Moon's Voyager
Italian climber Niccolò Ceria has made the first repeat of Voyager sit, the 8B+ boulder problem put up by Ben Moon in 2006 on the gritstone outcrop Burbage North in England’s Peak District.