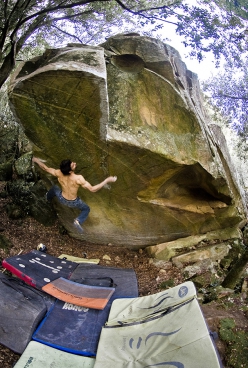 In late February Niccolò Ceria climbed at Pietra del Toro, a relatively unknown bouldering area in Southern Italy’s Basilicata region where he established a flurry of new problems, including the beautiful 8A+ ""Geometrie non Euclidee".

Niccolò Ceria has been on yet another solo bouldering trip, as ever in tireless pursuit of the perfect problem. This time not in Fontainebleau, where he spent 60 days alone last year, but at Pietra del Toro in Basilicata. An area close to Campomaggiore that is still little-known despite sporadic visits of some top-notch climbers such as Michele Caminati and Mauro Calibani. The potential for new problems is big, both in terms of numbers and in quality. So much so that, on his return to Biella, Ceria was spurred to define it as "Bouldering at its finest, I would say. This one can probably get into my all time top-10 list."

Niccolò, why Basilicata? It’s not the usual bouldering destination…

Yes, the area is, like so many others, still off the beaten track and rarely visited. All areas that aren’t in fashion tend to see few visitors and from my point of view it’s lucky that this place isn’t "trendy". I’ve known about it for 5 or 6 years and I’ve always wanted to go there. I was interested in checking out the problems that had already been climbed, above all though I wanted to see something new and discover some lines that meant something to me. I haven’t got much experience at exploring for new stuff on sandstone and I count wait to test my ability to see something new on this type of rock.

So what do you think about the are?
The trip went well, I was really excited by the forms of some of the boulders, by the texture of the rock and the purity of the different lines. It’s a relatively small area, with diverse gems scattered here and there, and so I got to learn about the area little by little, gleaning one bit of information after the next. It’s one of those places that is lucky enough not to have a guidebook yet, that isn’t chaotic. At first I was a little bit worried, I was uncertain about what I might find, but after walking round a bit I discovered several interesting things hidden away under the Mediterranean bush. And I found a couple of lines I’d been looking for for a long time.

So what do you search for in a boulder problem? And did you find what you were looking for?
Of course I’m psyched by the quality of a problem, and this takes into account different aspects, such as the quality of the rock, the boulder’s appearance, the technical moves, the logical nature of a line and other features, too. Quantity is only interesting in relation of quality; if quantity means losing quality, then it’s better to have nothing at all.

You went on your exploration trip alone
Yes. I was armed with only a bit of information and a lot of curiosity.

Then though you ended up being in just the right company?
Exactly. For ten days I climbed with Marco Giorgio, a climber of Potenza. He showed me many different things, some I knew already, others I’d not seen before. We got on well and were super motivated to repeat some classics, and find new problems during the hottest hours of the day. We cleaned Geometrie non Euclidee together, the most beautiful line I’ve ever brushed and probably one of my most important climbing moments.

Now that you're back in Biella, if you hear the words Basilicata bouldering, what’s the first thing that comes to mind
The projects I saw but was unable to clean or climb. They’ll remain impressed in my mind for a while, until my next trip where I hope I’ll encounter cooler temperatures.