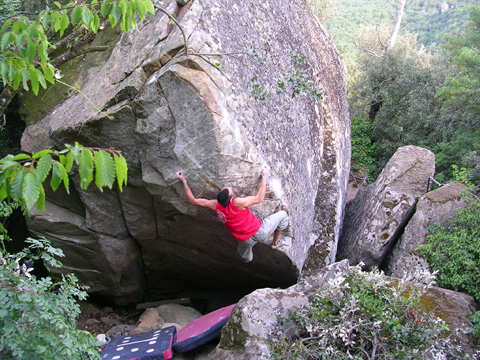 One of the main rivers in Basilicata, the river Basente, flows past high peaks and the towns of Pietrapertosa and Castelmezzano on the one side, and Campomaggiore on the other.

Thanks to the inexorable erosive action and the inevitable landslides a series of boulders of all shapes and sizes have created an enormous playground for climbers, and hidden deep in the forest of the Gallipoli Cognato and Campomaggiore parks lie numerous different bouldering areas. At present the biggest is located at Pietradeltoro and this boasts over 500 problems from 4C to 8B , many of which were crushed by the powerful fingers of Michele Caminati and Mauro Calibani, the latter having played an important role in developing the area right from the outset. The boulders vary in height up to 7m and great attention has been placed on preparing the landing areas, with works comparable to building the pyramids in Egypt.

Despite being immersed in the forest, the boulders are situated at an altitude which ranges from 3 to 600m and climbing is therefore not recommended in summer but if it's raining or snowing up north then you can almost all always climb with just a T-shirt down here in Southern Italy. Having said that, bring a fleece jacket just in case.

Exit at Campomaggiore, continue to the village and after 1km turn off right towards the station. Descend past 2 hairpin bends then park the car and continue on foot via the path on the left. After two barbed-wire fences reach the first boulder problems (30 minutes).

Campomaggiore and Pietrapertosa are famous for their hospitality, with hotels, typical restaurants and apartments to rent for short periods. Camper vans can park with the Gallipoli Cognato park (www.parcogallipolicognato.it).

"A Sud" by Graziano Montel (Edizioni Versante Sud.) This guidebook covers the problems in the old area in Parco di Gallipoli Sognato and a new guidebook is due out in 2012.

No comments for Pietra del Toro