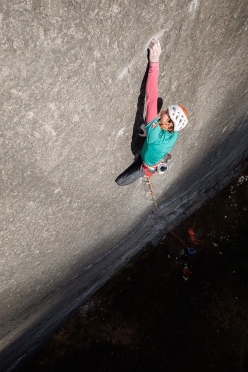 Michi Wohlleben climbing Psychogramm, the 8b+ trad climb at Bürser Platte in Austria freed by Alex Luger in 2014
Photo by Alexander Fux 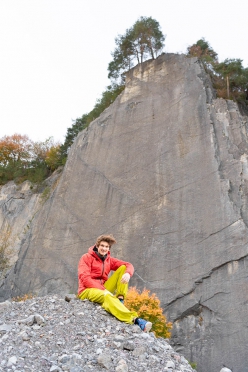 German climber Michi Wohlleben has repeated Psychogramm, the 8b+ trad climb at the Bürser Platte in Austria, first ascended in 2014 by Alex Luger.

After repeating the famous Prinzip Hoffnung at Bürser Platte in Austria last June, 29-year-old German climber Michi Wohlleben has now taken things one step and repeated the adjacent Psychogramm. Originally climbed as an A3 aid route in the 1990s by Wolfgang Muxel, this tenuous line was freed as a trad climb by Alex Luger in February 2014 and repeated by both Fabian Buhl and Jacopo Larcher.

The 8b+ grade is obviously only a tiny indication of the overall difficulties and completely masks the complexity of placing the tiny wires and friends on lead, and the fact that a fall low down on the route is out of the question.

Wohlleben led the route on 16 December, placing all the gear as he went. He had first tried it on toprope on 21 November and even managed to toprope it clean on his second day, but the cold snap forced him to abandon attempts. On Monday though the warm Föhn wind blew strongly and quickly dried out the slab, enabling Wohlleben to send the route on his first lead attempt.

Video of the redpoint ascent of „PsychoGramm“ (8b+,Trad) sorry for the excavater in the video.... Cheers

16.06.2019
Michi Wohlleben climbs E9 trad and 9a sport
Germany’s Michi Wohlleben has repeated the E9 trad climb Prinzip Hoffnung at Bürs in Austria, as well as the 9a sport climb Speed Integrale at Voralpsee in Switzerland.