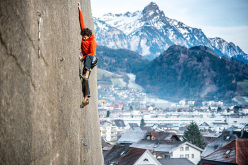 Jacopo Larcher climbing Psychogramm, the 8b/+ trad located on the Bürser Platte in Austria
Photo by Riky Felderer 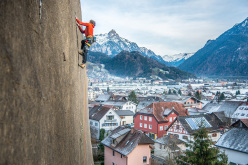 Jacopo Larcher climbing Psychogramm, the 8b/+ trad located on the Bürser Platte in Austria
Photo by Riky Felderer

At the Bürser Platte in Voralberg, Austria, Jacopo Larcher has repeated Psychogramm, the trad climb graded 8b+.

Psychogramm, a name that reveals all. This climb at the Bürser Platte, a smooth slab located directly above the small Austrian town Bürs, combines extremely delicate moves with the psychological demands of having to protect the climbing with tiny nuts and friends. A trad route of utmost difficulties therefore, first ascended with the use of aid by Wolfgang Muxel in the nineties, then freed by Alex Luger in February 2014 and repeated by Fabian Buhl in January 2015. Now Italy’s Jacopo Larcher has made the third ascent, after having tested his mettle last year on the famous Prinzip Hoffnung 8b+ on the same slab and, above all, after the first trad ascent of Lapoterapia at the start of December. Psychogramm and Lapoterapia offer two completely different styles of climbing: while the former is a technical and dangerous slab, the second is slightly overhanging and requires power and endurance. But the common denominator for both is that they’re trad. And this, of late, seems to be the true driving force behind Larcher’s climbing.

Psychogramm was an old project, freed in 2014 by Alex Luger. It was then that I repeated Prinzip Hoffnung and on a couple of occasions I belayed Alex as he attempted the project. The route immediately grabbed my attention, but the season was coming to an end and at the time it seemed simply too dangerous. I’d promised myself I’d return the following winter but due to a finger injury I only managed to get back on it towards January, when Fabian made the first repeat.

After a couple of days I found some good beta for the crux section, and I self belayed the route toprope, placing the gear as I went. After some more toprope practice I felt ready for my first attempts from the ground, unfortunately though it’s not easy to find two belayers and due to various other obligations I only managed a couple of attempts. All failed towards the end of the crux section and so the project had to be put off once again.

Last week, after having climbed Lapoterapia, I decided I wanted to give myself another chance on Psychogramm. Conditions weren’t the best, at this time of year the sun warms the slab for only a few minutes each day, which meant it was very cold indeed… but I didn’t care: I was super motivated and felt strong mentally.

I checked the gear placements and much to my own surprise managed to climb it clean on toprope, self-belayed. After another self-belay session I was ready for an attempt from the ground. This time I felt particularly safe and opted to try with just one belayer, and prayed that the nuts that protect the crux wouldn’t whip out… you risk hitting the deck otherwise. Unfortunately my foot slipped off the crux moves and as it was cold I had to call it a day. In any case things had gone well, I’d felt completely safe and concentrated during the attempt.

The next day, last Friday, after two self-belay sessions to warm-up I set off on another attempt from the ground… and this went perfectly!

Apart from the actual ascent, what I’m particularly pleased about is the mental progress I’ve made in recent years. A route which not even two years ago seemed utterly crazy and kamikaze… had now taken on a totally different meaning. I’m curious to find out what the next step will be! ;-)