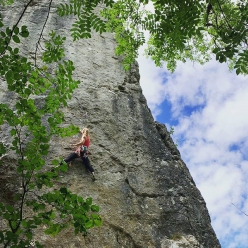 Britain’s Madeleine Cope and Emma Twyford have both repeated an E9 trad route by climbing, respectively, The Final Round at Illam Rock in England and Chupacabra at Pembroke in Wales.

E9 represents pretty much the upper echelon of British trad climbing, it’s a grade that extremely few have mastered and which sits just below what, currently, is deemed physically and psychologically possible.

Despite the fact that Britain’s first E9 was established way back in 1986, by an inspired Johnny Dawes on his Indian Face at Cloggy in Wales, such is the demanding nature of the difficulties that even today E9 repeats are still a rare commodity. Indeed, the grade has not been onsighted yet and in many respects this feat is considered the Holy Grail of British trad climbing.

In 2011 Hazel Findlay became the first British woman to climb E9, followed by Emma Twyford in 2013, Eve Lancashire in 2016 and Madeleine Cope in 2018, and although some visiting climbers have followed suit - notably Barbara Zangerl and Caroline Ciavaldini - female E9 ascents are understandably few and far between.

Which is precisely what makes the recent achievements of Cope and Twyford all the more important. While the former opted to repeat The Final Round at Illam Rock in the Peak District's picturesque Dovedale, the latter tested her mettle on Chupacabra in the atmospheric Huntsman's Leap at Pembroke in Wales. Both climbers, who now have multiple E9 ascents to their names, opted to work the routes toprope first prior to their successful headpoint ascents.

Pembroke at its finest again. A superb weekend celebrating John Bunney’s 50th birthday. A few weeks ago I’d sacked off this route due to high humidity. It felt desperate and sketchy. After checking out some other routes I was drawn back to this on Sunday. I checked the moves and realised I could do it but on Monday after 4 days in I was tired. I’m sure we all get those days where we question if we want to commit and take big falls, I wasn’t sure. As the tide was well on its way in I decided to have a go, accepting the risks. I threw the kit on my harness in a haphazard manner, tied in and set off. My rope management wasn’t the best but I could see the tide creeping towards @caffinspain. Surprisingly I felt calm on the run out and made it through to the last few moves only to have my foot slip a couple of moves from the top taking a smaller fall! C’est la vie! one thing is for sure it got me psyched and I’ll be back! sometimes these things feel easier on the lead and we find the right headspace/zone to just go for it! I love that feeling on trad, it’s pretty special. @patagonia_climb @patagoniaeurope @patagonia @dmm_wales @scarpa_uk @frictionlabs @edelweiss_connection @seatosummitgear @climbskinspain @hard.bar @v12_outdoor Thanks to @rock_science_ for the

After choosing to ignore summer time Peak Limestone conditions, and trying this route in the heat and humidity, it was nice to go back to Illam Rock yesterday and climb The Final Round (E9 6c). This route takes a nice direct line up this amazing feature. It starts with techy boldness, gives a good amount of pumpy climbing, and the upper crux felt pretty stretched to me! Nice to feel focused on these big moves at the top of the route after falling here last time Thanks @minaclimbing and @ollietorr for the belays @mammut_uk @mammut_swiss1862 @lasportivauk

17.09.2009
Huntsman's Leap, rock climbing in Wales
With almost 60 routes on its East and West Walls, Huntsman's Leap is one of the most popular sea cliffs in Pembroke, Wales.