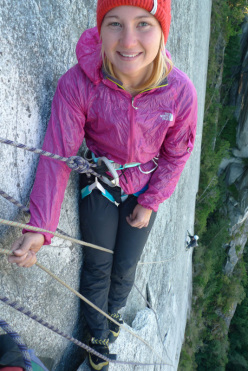 The news is astonishing: in late March Britain's Hazel Findlay repeated Chicama on the island of Holyhead just off Anglesey in North Wales. In doing so she has doubled her takings, bringing her tally of E9 climbs to two after having become the first woman to climb E9 in summer 2011when she repeated Dave Birkett's Once Upon a Time in the South West at Dyer's Lookout in Devon .

Chicama is a steep, loose line first climbed by Tim Emmett in 2003 which had lain ignored and unrepeated at at Treaddur Bay until Findlay turned her attention to it in March. At the time of the first ascent Emmett had protected the route with trad pro and, since bolts are uncommon on Welsh sea cliffs, a series of pegs. These had deteriorated significantly so Findlay replaced them in exactly the same places, adding a further peg to the original 6 where one couldn't be removed. Once the route was deemed sufficiently safe Findlay set about working the moves - no mean feat due to the steepness of the cave - and then headpointed the route on her first attempt.

In sports climbing terms the difficulties of Chicama might compare to 8a+, but having to place all the gear on lead and rely of dodgy protection obviously makes this an entirely different proposition, hence the "hallowed" E9 grade. To put this into perspective: while it is true that sports climbing standards have risen significantly, E9 "is still an incredible feat of rock climbing skill" as Dave Macleod explained to Planetmountain in 2009 adding "yes, it’s still world class."

When asked about her two E9's Findlay explained: "They are massively different routes, Once Upon a Time in the South West is a slab, Chicama is overhanging. Once is technically harder and there is one pretty hard move on it. It's also a bigger proposition - 50 metres and 30 pieces of weird gear. That wall is also quite frightening for some reason - big and looks totally unfeatured from the ground. Chicama on the other hand is only about 20 - 25 metres high, but feels longer because it's steep and traverses left then back right past slightly sketchy rock and often wet and greasy holds. It would maybe be more possible to hurt yourself on Chicama though - since it's shorter you have a greater chance of hitting the ground."

For a full report and photos check out hazelfindlay.wordpress.com