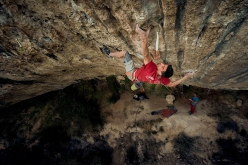 Jorge Díaz-Rullo repeats First Round First Minute 9b at Margalef

At Margalef in Spain Jorge Díaz-Rullo has repeated the 9b First Round First Minute, established by Chris Sharma in 2011.

One of the world's first 9b, First Round First Minute at Margalef in Spain put up by Chris Sharma precisely a decade ago, was repeated the other day by one of Spain's most promising climbers, Jorge Díaz-Rullo.

At the start of March Díaz-Rullo climbed First Ley, the 9a+ which shares the same start as FRFM before breaking off left the top to avoid the crux finish, and he now required a further 9 days of effort for link Sharma's undisputed Margalef masterpiece. This has been repeated by the likes of Adam Ondra (2014), Alex Megos (2016) and Stefano Ghisolfi (2017).

First Round First Minute is now Díaz-Rullo's fourth 9b after Planta de Shiva, Ali Hulk extensión total sit start at Rodellar and El Bon Combat at Cova de Ocell in September 2020 and came about just before his 22nd birthday.