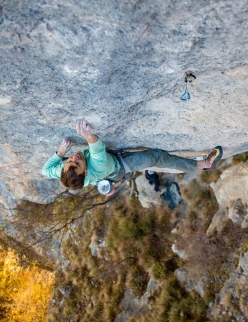 Jonathan Siegrist repeating Goldrake 9a+ at Cornalba, Italy, Novembre 2021. Bolted by Bruno Tassi, the route was freed in 2010 by Adam Ondra.
Photo by Marco Zanone 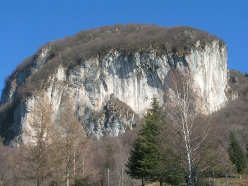 American rock climber Jonathan Siegrist has repeated Goldrake, the 9a+ established in 2010 by Adam Ondra at Cornalba in Italy.

After Andonno where he repeated several high-end climbs including the 9b Lapsus and the rarely repeated Mistero 8c+/9a, American climber Jonathan Siegrist visited another historic crag in northern Italy, Cornalba above Bergamo, where he repeated Goldrake

Located on Cornalba’s impressive east face, this famous pitch was bolted years ago by the crag local Bruno Tassi "Camos", and freed in 2010 by the then 17-year-old Adam Ondra who graded it 9a+. A number of repeats have ensued, including Gabriele Moroni (2014), Stefano Carnati (2016), Stefano Ghisolfi (2016), Silvio Reffo (2016) Luca Bana (2019) and Francesco Castellano (2020), and now after only four days of attempts Siegrist has also sent this technical gem.

"It’s pretty unusual how there are no good holds for so long" Siegrist told planetmountain.com. "It’s not necessarily one of my hardest, but it’s a super good route. I’m psyched."

07.04.2010
Adam Ondra, Goldrake 9a+ at Cornalba
17-year-old Adam Ondra has carried out the first ascent of Goldrake 9a+, a route bolted by Bruno "Camos" Tassi years ago at Cornalba, Italy.