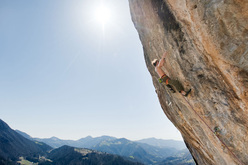 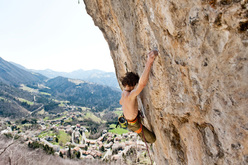 Adam Ondra, Goldrake 9a+ at Cornalba

17-year-old Adam Ondra has carried out the first ascent of Goldrake 9a+, a route bolted by Bruno "Camos" Tassi years ago at Cornalba, Italy.

If you believe that Adam Ondra is nothing more than a climbing machine who repeats other people's routes, think again: this weekend he travelled from his home in the Czech Republic to Cornalba in Italy where he managed to free an old project, Goldrake 9a+.

The route in question was bolted years ago by Bruno "Camos" Tassi to the right of the famous testpiece Jedi and had never been freed until Ondra managed to link the moves in an epic battle yesterday. The 17-year old had stated that in some respects Cornalba represents the crag of the future and as the local Camosci climbing site mentions, this first ascent heralds a new era for this limestone mushroom.

So after La grande linea dei sogni 8c+/9a at Erto, Marina Superstar 9a+/9b at the Grotta San Giovanni in Sardegna, A Present For The Future 9a/9a+ at Madonna Della Rota and Vento nei Capelli 8c+/9a at Cornalba, here Ondra goes once again with another new "gift" after his nth raid into Italian territory.