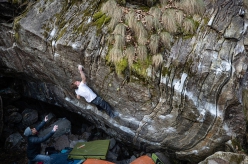 Giuliano Cameroni potent on Poison the Well, 8C+ boulder at Brione in Switzerland

Swiss rock climber Giuliano Cameroni has made the first ascent of Poison the Well, an 8C+ boulder problem at Brione in Switzerland.

Switzerland’s Giuliano Cameroni has come up trumps on the the smooth wall to the left of the famous boulder problem Panplemousse on the granite outcrops of Brione, making the first ascent of Poison the Well. The 21-year-old has graded the bloc 8C+, indicating that it’s one of the hardest in the world and only the second of these difficulties throughout Switzerland, after Off the Wagon Low freed in November 2018 by America’s Shawn Raboutou in nearby Valle Bavona.

Cameroni told planetmountain.com that "the boulder climbs a 40 degree overhanging wall. There aren’t many trickeries, the only thing you need is power and finger strength. There are seven moves, but the crux is at the 5th and the 6th move, which could be considered 8C in itself." To free the line Cameroni needed a mere 8 days, which he believes to be plenty. "Eight days is a lot! I had to rest a lot between sessions because it takes time to build the specific power in the shoulders."

More than a decade after the world’s first 8C+ boulder problem - Gioia at Varazze established in 2008 by Italy’s Christian Core - 8C+ problems are becoming more commonplace. Having said that, worldwide there are still only a handful and these are capped by just Burden of Dreams, put up 2016 by Nalle Hukkataival in Finland, and No Kapote Only, established in January 2019 by Charles Albert at Fontainebleau in France. Both are graded 9A and both await confirmation.

“Poison the Well”(8C+/V16) FA After 8 days the project went down! Beautiful overhanging wall, powerful and precise. For sure my hardest so far. Stay tuned for the video, coming soon on @mellowclimbing @scarpaspa @prana @frictionlabs @paulrobinson87

Cameroni thanks S.C.A.R.P.A. , prana, FrictionLabs and Peter Bouldering for the support