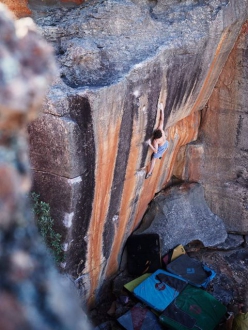 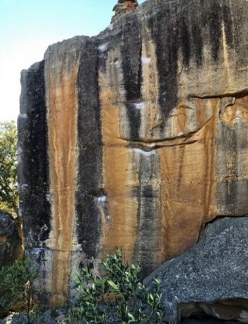 The Smile at Rocklands, freed be Giuliano Cameroni in July 2018
Photo by Oliver Krueger

Giuliano Cameroni at Rocklands beams up The Smile

Swiss climber Giuliano Cameroni reports about The Smile at Rocklands, South Africa, a boulder problem he freed at 8C which he believes is 'a contender for one of the best problems in the world'.

Finding a King Line isn’t easy. Discovering one right in the heart of one of the world's most famous bouldering areas is even more unlikely. Perhaps this is why The Smile at Rocklands is so special. The boulder is located, somewhat incredibly, just above the Pakhuis climbers campsite and was freed this summer by ace Swiss climber Giuliano Cameroni. The name of the problem stems from the natural smile formed by the holds, but also perhaps from the 21-year-old’s reaction when he freed the highball in mid-July.

THE SMILE
by Giuliano Cameroni

I found this amazing wall two years ago with Sam Ometz. The rock is perfect and the crux holds design an emoji on the wall, with a small crimp for the mouth and two rounded slopers for the eyes.

I tried it for the first time this season, but the first session went super bad and I couldn’t do any of the hard moves. So I moved on, psyched to climb on other boulders.

After a few weeks I went back with good conditions and surprisingly the crux moves felt way better than before! I needed two more days to do the hardest move (a dynamic lock-off from the crimp to the right eye) and four more to send the whole boulder.

During the last week it became a real mental battle, because I kept falling off the last move which revolves around a delicate friction-dependent sloper. When I finally stuck the lip I was overcome by immense joy: the battle was over and the boulder was done!

I feel that I improved a lot from this experience, and that the boulder itself taught me a lot about climbing in general. A few months later I’m still psyched to have done what I consider a contender for one of the best problems in the world! Now it’s time to move on, other projects await!

Cameroni thanks S.C.A.R.P.A. , prana, FrictionLabs and Peter Bouldering for the support